Category: Got Money Got Honey

I purposely did not have a clickbait title today because just wanted only the long-time readers and people who follow me to know the update, as opposed to trying to draw in a newer audience to observe my financial recklessness.Notice anything different…

Get "Woke" about "Passive Income"

Just read this comic by the Woke Salaryman. It describes the ever popular trend and fad of “passive income” investing and it’s allure. I doubt we’ll ever see it cease to be a popular investing strategy. Even personally, I like the concept and idea of f…

BTC peeked under $7k and ETH was down to $140 at one point of time yesterday.The market is ~30% down from the start of the month.Even my 200 ETH and then 500 ETH deposit into BlockFi is down from the time when I deposited my ETH in there.But what is 30…

This might upset a lot of people.It’ll upset the really naive people who actually believe that such things exist.But more importantly, it’ll upset the people that market and operate such “services”.It irritates me to no f**king end that YouTube display…

I first blogged about Blockfi on Oct 15. I had put in a casual 200 ETH with them with the intention of earning an easy 4.1% a year of interest in ETH.Fast forward to the start of November, I blogged about receiving that interest. A nice and expected 0….

It’s the start of the month, and the best part of every month will always be me getting credited interests from my previous month of deposit balance in my crypto interest account!As a refresher of exactly what the hell I am talking about, at the start …

China WILL launch its own "digital" yuan aka CRYPTO RMB

Govs won’t want to say “crypto”, because that sounds scary, so they will just stick with the very neutral “digital”.

While I totally 100% expected this, I am just blown away by the absolute speed that this is progressing. The digital RMB is announced and will be rolling out over the next few quarters, though trials are expected by the end of the year. 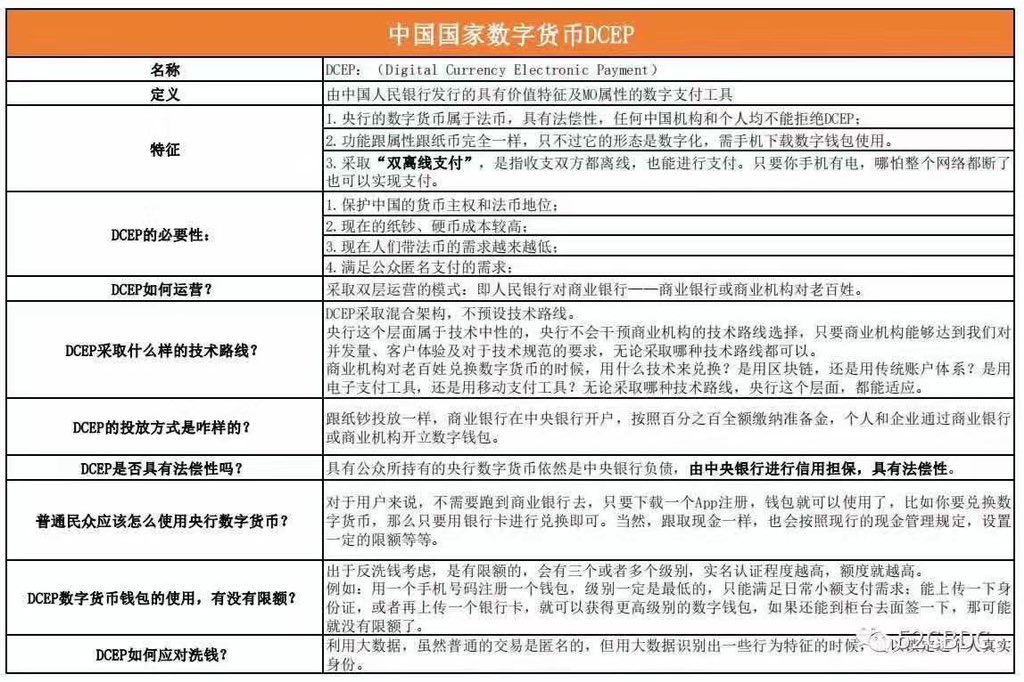 So their digital yuan is actually crypto yuan which will be running on their DCEP network. I guess? As if my Chinese is good enough to read technicalities on blockchain, lmao.

I did just freaking say yesterday that:

Looks like China is being very smart to not only go digital, but go with blockchain. This is very clearly a stepping stone for them to educate people before they can roll out their digital / crypto RMB.

I think that within a few years, all RMB will be crypto-based, which means Alibaba and Wechat will not be simply processing internal database updates of balances, but they will be connected to the RMB blockchain. Of course, nothing in life is certain, but in my opinion this is blatantly obvious as to what will happen in the future.

Am I an oracle?

No, it is bloody obvious. As with many other things.

(such as which of my crypto will pump and make me a multi millionaire, but I jest)

What is also very obvious is that this will cue a lot of other countries to begin to digitize (READ: crypto-base) their fiat.

While the US and most of western Europe take turns blocking Libra and shitting on the notion of a corporate cryptocurrency, China has just surprised buttsex everyone by going straight to a national cryptocurrency.

At this early stages with so many unknowns, what I can see is that Alipay and Wechat will basically transform into a giant front end wallet UX for accessing and storing the crypto RMB rather than do the direct processing of money transfer. Transactions will be done by the DCEP, while they try to add value by connecting those payments to auxiliary services they provide. Nothing new, except that basically they will take a massive hit on anything payment/banking/finance/investing related, though I do see it entirely possible for them to be kickbacked a certain amount for funneling that volume. Jeez, sounds like affiliate revenue, doesn’t it? Hah.

Anyway, that is honestly just the small issue. I already mentioned the bigger issue before.

Depending on how quickly other countries react and proliferate their own national cryptocurrencies will ultimately decide their future if crypto RMB will become in the future what the USD is today.

I have to say, China’s massive footwork, background homework and current progress and position is putting them is a YUUUUGGEEE headstart compared to almost any other country in the world. I find it extremely unlikely that the US can do anything about it. The most “obvious” counter to this crypto RMB is actually backpeddling on Zuckbucks and make it a China vs the Rest of the World situation.

Whatever the bloody case, I continue to happily stack censorship and seizure resistant cryptocurrencies because unlike regular people I actually care if my money is actually MY money.

Imagine being so grossly naive and still thinking that in 2019 blockchain technology is simply an expensive database (and not what the implications of controlling that technology entails) and that cryptocurrencies are a scam.

"Blockchain" Booming in China. Good for money, Bad for freedom.

Gonna blaze through this post with some facts, then end with some thoughts.

China “blockchain” stocks are limit up 10%.

“Blockchain is a revolutionary tech, but it’s application is not trading cryptocurrency, I demand whoever trade crypto stay calm” pic.twitter.com/pBGFqhJJC5

Even talked about on CCTV2. 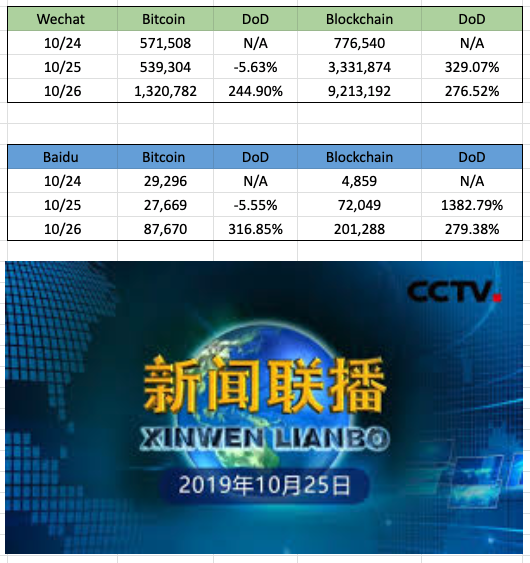 Politics aside, I think it is quite clear what Xi has done for blockchain.

It is now political and career suicide in China for any individual or business to carelessly make public remarks and say that blockchain/Bitcoin is a scam or a ponzi.

Looks like China is being very smart to not only go digital, but go with blockchain. This is very clearly a stepping stone for them to educate people before they can roll out their digital / crypto RMB.

I think that within a few years, all RMB will be crypto-based, which means Alibaba and Wechat will not be simply processing internal database updates of balances, but they will be connected to the RMB blockchain. Of course, nothing in life is certain, but in my opinion this is blatantly obvious as to what will happen in the future.

As most regular people simply fail to understand, the blockchain makes this exceedingly TRANSPARENT where everyone knows every transaction. This makes it probably the WORST form of money when transacting in illegal activities.

Of course, China knows this very well. Do you know what will happen once the crypto RMB rolls out? Tax evasion and money laundering will drop to near zero. It will be near impossible to do any illicit transaction since everything will be recorded and it will be impossible to evade since the system mandates that you use crypto RMB for everything.

However, this also means that you hand over complete authority over your finances to your government. I don’t know about you, but that is something that I will definitely NOT be doing, at least not for the majority of my wealth.

China’s social rating system is already live and at a level where people can be totally locked out of basic goods and services because the government has blacklisted them for whatever reason. Imagine the grip they have over your balls if they can control your bank accounts too – all of them.

Obviously, this crypto RMB will GREATLY extend and enhance the reach, power and control that the Chinese government already has over it’s entire population, but also anyone in the future that will ever hold or transact with digital RMB.

So while I think it is an excellent development that China has officially recognized blockchain technology (and Bitcoin and Ethereum are IMPOSSIBLE to be censored or avoided when understanding and teaching blockchain), I am almost certain that this technology will be used for nefarious purposes.

Bitcoin and crypto may pump on this news, but I would be wary and understand what is actually going on.

Unlike the future digital crypto RMB or USD or even SGD that WILL appear all over the globe in the near future (whether you like it or not), Bitcoin and Ethereum will always be outside of any government’s control.

If you’re snoozing on “blockchain”, wake up your idea. Most of you are greedy and want to be in it to make the sick 1000%+ gainz. But when you understand the power of open and decentralized cryptocurrencies and what that means for financial and personal freedoms, only then will you truly realize why they are so valuable and why idiots like me are willing to throw down $10,000 to buy a Bitcoin.

When the time comes for Singapore to go crypto (they will call it “digital”), I can bet with you that the issues over privacy and financial control will barely even be mentioned, and the entire initiative will be rubber stamped and executed without so much as a squeak from the population. Mainly because everyone is too uneducated on this topic.

My only hope and wish is that normal people can wake up and understand what the hell is actually going on here. Probably not gonna happen. Most people are sheep. Bitcoin baaaaad. Rat poison. Baaa.

Lol, crypto markets be lit af.My stupid flex post yesterday had SNX +1625% when I used yesterday’s price of $0.773.Well it is now…Damn it. If I had posted that today instead, it would be +1861% instead, and that looks more chad.Anyway, why the pump? …

One of my Crypto Investments is up 1625% since March

Back on 25th March earlier this year, I tweeted that I was buying heavily a low cap altcoin called Synthetix (SNX).

just wanna put it on record.

remember how i bought a fuck ton of $DGD in mid to late 2017 when prices were depressed and everyone thought it was a failed and dead project?

It was just a ~$3M USD market cap cryptocurrency back then, making it an extremely risky small cap crypto play. Are there even companies this small on the Catalist?

Lol okay, so there’s just 10 companies on the Catalist that are under $3M SGD that aren’t suspended or on the watchlist. Anyway…. 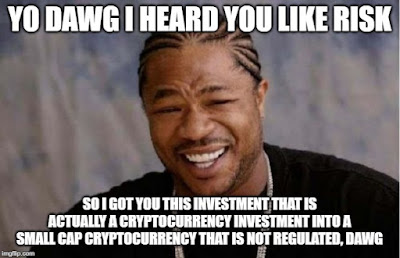 I have mentioned Synthetix by name once on my blog in Dec 18. But actually, I’ve been talking about it since April 2018 and I even said that in May 2018 that it was my favourite project! I’m sure no one noticed the rebrand that happened late 2018, but before that Synthetix was originally known as Havven.

Anyway, for reasons that I have been incessantly tweeting about since forever, I was strategically buying into the depressed prices heavily. You can go onto Twitter and check for how long and how often I have been tweeting about SNX. Audit it. All the evidence is there.

7 months on, what do we have here? 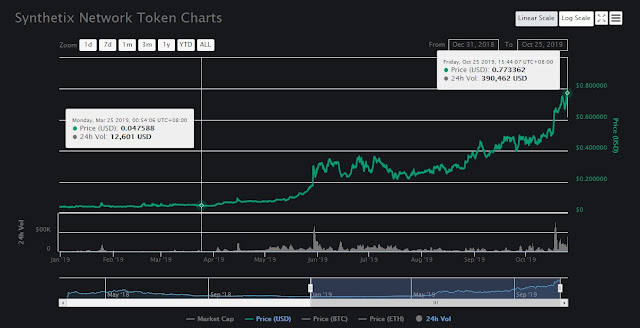 Oh my. I guess it is probably about that time for someone to say that I am so “lucky” to have magically owned such an investment.

You know what is going to be absolutely ridiculous?

When I decide to flex in a blog post that I made $1M of profits in crypto.

Y’all think it’s a meme and I’m just joking, right? Maybe I am. Maybe I’m not.

Anyway, I’m not ready for that yet. But maybe soon? I’m working on it.