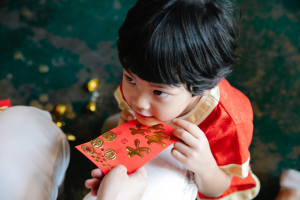 Just as we’re done celebrating the new year, we’re up for another wave of festive eating and cheer – Chinese New Year, the biggest holiday for Chinese people; and unique to this festival is the spreading of wealth.

It is tradition every Chinese New Year (CNY) to get new clothes, new shoes, do a spring cleaning to usher in the Lunar New Year. Part of that same tradition is for married adults to dole out red packets (hong baos) to kids, juniors and unmarried singles as a symbol of luck, life and happiness – basically tokens of well wishes. Some may even rush to the banks, sometimes queueing for hours just to withdraw freshly printed new notes.

This year, the Monetary Authority of Singapore (MAS) has put out a message to encourage people to give digital gifts such as e-hong baos or to reuse notes for CNY to reduce queues at bank branches and to support the environment. MAS shared that approximately 100 million pieces of new notes are printed every year for CNY and other festivals, with a large portion of the new notes that were issued (especially the $2 bills) returned after CNY and with these notes subsequently destroyed as it exceeds normal circulation demand. “The carbon emissions from the production, transportation, and destruction of such new notes each year is highly wasteful, unnecessary, and impacts the environment negatively,” said MAS in their media release.

To do your part for the environment, it’s worth choosing used notes instead of new and good-as-new notes. Alternatively, you can prepare last-minute hong baos with digital gifts and continue to exchange hong baos digitally with your loved ones.

There are benefits to giving e-hong baos. Besides keeping track of all your hong baos in one app, you can also prepare hong baos last-minute, especially if you’re worried of carrying too much cash on you. For DBS and OCBC customers, here are some ways you can digitally spread your wealth.

For DBS Customers– Share the wealth and send money to others via PayLah! eGift or QR Gift Card. DBS’ QR Gift cards can be gifted in person. These QR Gifts cards are also free at all DBS/POSB branches and Sheng Siong Outlets. Once you’ve received the QR Gift Cards, just scan to add or receive money via QR Gift.

For OCBC Customers – Share happiness and prosperity with your friends and families with e-Ang baos via OCBC Pay Anyone. In order to receive e-Ang baos, recipients will need to be registered on PayNow. Children can register for PayNow, too.

For UOB Customers – Send e-hongbaos instantly and conveniently with UOB TMRW via PayNow. You can also generate personalised PayNow QR codes and personalised well-wishes to your loved ones. As a festive touch, you can also select a specially designed Lunar New Year festive background for your successful transfers.

Recycle Your Red Packets At Any DBS, OCBC And UOB Branches

Play your part and save the environment by recycling your red packets at any local bank branches. These recycling boxes which are also made of recycled materials at available at every branch. According to OCBC, excess red packets and recycling boxes will be pulped and made into products such as cardboard boxes.

Read Also: 6 Ways To Make Money By Recycling In Singapore

Where To Get New Notes And Good-As-New Notes

In case you still want to fill your hong baos with crisp notes, they are available at DBS, OCBC, UOB, Standard Chartered, Maybank and Citibank. One would have to pre-book new notes via the bank’s online reservation system before collecting at the branches.

There are also pop-up ATMs littered all over Singapore that dispense new and good-as-new notes in preparation for CNY. Withdrawing from an ATM can also allow you to spend less time queuing at the bank.

Regardless which option you take – old cash, new cash or digital cash – have a prosperous Lunar New Year and stay safe.

The post Why Choosing Used Notes Over New Notes/Good-As-New Notes For Hong Baos Is Better For The Environment appeared first on DollarsAndSense.sg.