Econ Healthcare lost 3.2 million on a HK stock. But how did Crosstec even appear on its radar?

In a previous article about Econ Healthcare, I wrote about how I wasn't interested to invest in the company for various reasons. Today, I add another key reason to that list and question their management's investment decisions.

On January 9, it was reported that Econ Healthcare spent S$4 million buying shares of a Hong Kong listed firm Crosstec. The reason provided was that [they] "observed that 'shares are on a rising trend'", and that “the company is of the view that the potential gain on investment on quoted security will improve the yield of idle cash and therefore the return of the company’s shareholders". 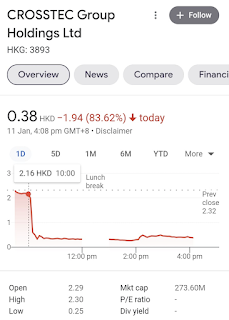 When we zoom further out on the charts, we can see that the so-called uptrend only started in November. 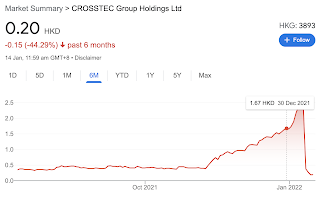 And plunged the day immediately after news of Econ Healthcare's investment was made public.

I shared on my Instagram on Friday that I suspected Econ Healthcare did NOT manage to exit its shares on time i.e. sell within the first 30 minutes of that fateful trading day, before the price crashed.

On my Facebook, I asked if they had lost S$3.2 million. 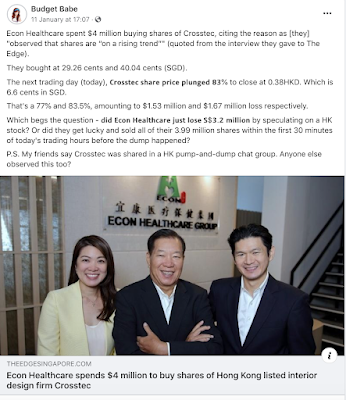 Well, it has since been confirmed that Econ Healthcare lost S$3.4 million on this failed trade. The loss is estimated to be more than 100% of the company's net earnings that was initially projected for FY2022, and the original S$4 million cash represents 10% of Econ's shareholder equity.

Now, how this company got onto Econ Healthcare's radar or why they even chose to invest their entire position into a single stock is anyone's guess.

2 of my readers told me that Crosstec was a stock promoted in several Hong Kong pump-and-dump telegram groups. It is uncertain if this was the same manner in how Econ Healthcare's management came to know of it as well.

You can read what MAS has to say about these Hong Kong pump-and-dump scams here.

In my view, the DBS analyst who downgraded Econ Healthcare to a "hold" in the aftermath of this saga was being too kind. Econ Healthcare was never a "buy" in Budget Babe's books, and after this incident, I'm even more convinced that I'll stay far away from their stock as an investment. 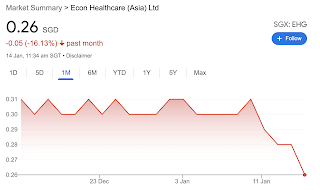 When management has a history of doing actions that destroy shareholder value, that is a clear no for me.

Aside from that, I'm gonna tell you why I think these are terrible reasons to invest:

As long-term investors, we should seek to invest in companies that are fundamentally strong or undervalued, or has strong growth prospects. Not just because you observe that prices are rising.

Only traders chase rising prices, and then the question of whether you're able to get out in time before the trend reverses is one that remains to be answered. In reality, not everyone ends up being able to exit in time.

The other thing NOT to do is to invest your entire capital into a single stock.

Whether you have S$4 million to invest or less, the key is to spread out your risks, because there will always be a chance that your investment could go south. And when that happens, your losses will also be significantly large. In the worst case, your entire portfolio could be wiped out.

So to end off this article, here's the 3 key takeaways:

1. Do not invest in stocks simply because its share price is rising.

2. Do not invest your entire capital position into a single stock unless you're willing to risk a 100% capital loss.

The 3rd takeaway is buried somewhere in this article, and I'll leave you to conclude that for yourself.