What Are HDB Jumbo Flats And How You Can Own One? 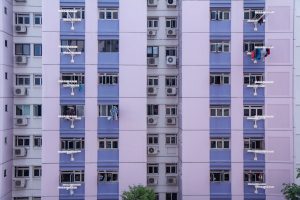 Jumbo flats are the mythical beasts of the HDB world: you hear rumours of their existence, but you may not have seen one before nor know of anyone that lives in them. However, unlike mythical creatures, they do exist.

According to a Straits Times article in 2017, there are only about 2,900 jumbo flats in Singapore. Due to the rarity of such flats, it comes as no surprise that they are highly sought after, especially in good areas, and are more expensive compared to regular HDB flats. It helps also that they are much bigger in size. Prior to becoming the President, President Halimah Yacob also lived in a jumbo flat.

Jumbo flats were first introduced by HDB in 1989 due to an oversupply of unsold flats (this was before the BTO system was introduced). These flats, which were mainly 3-room and 4-room, were combined to create one much bigger flat. This gives HDB buyers with bigger families an additional option to buy a bigger flat. Thus, the jumbo flat was born. 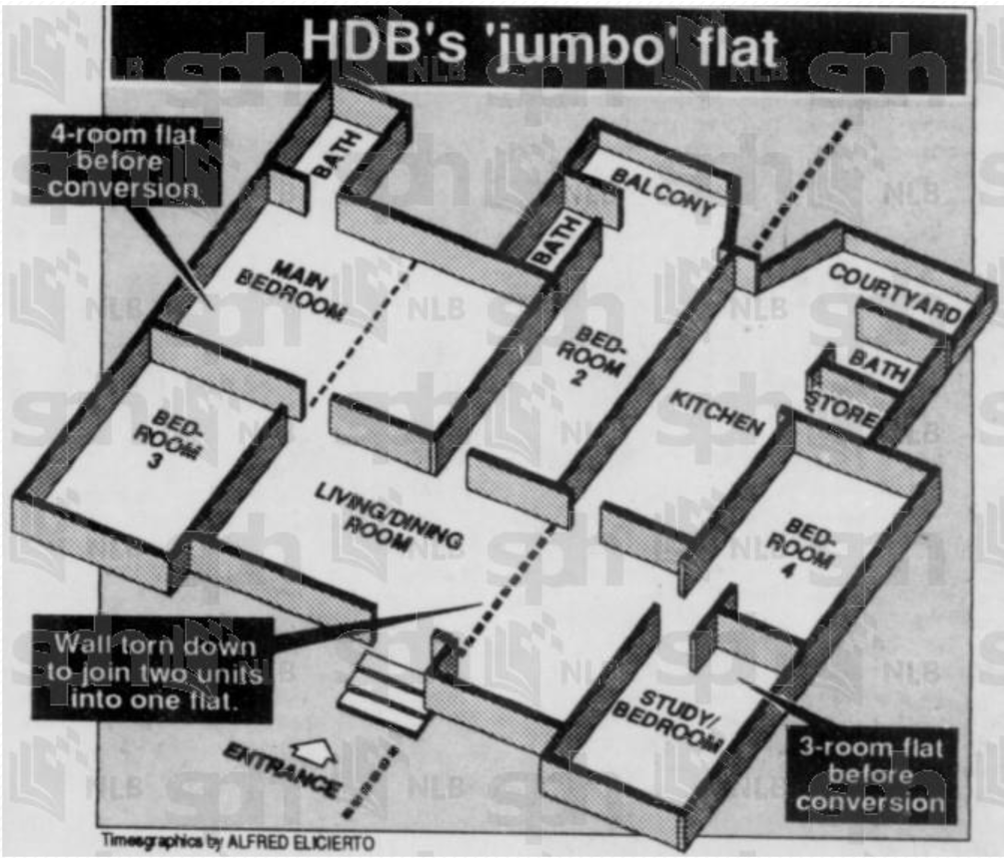 Source: NLB, Photo is from a 1989 Straits Times article

How Big Are Jumbo Flats & Where Can You Find Them?

Jumbo flats are typically between 150 sqm to 168 sqm or 1615 sqft to 1800 sqft. As they are created by merging two HDB units, they tend to have bigger common living and dining areas, and also larger kitchens and more bathroom units compared to regular HDB flats.

For size comparison, the new BTO 3Gen flats are about 115 sqm or 1238 sqft and Executive flats are 130 sqm or 1400 sqft. This makes jumbo flats possibly one of the largest HDB flat types available on the market today.

Today, HDB no longer build jumbo flats. If you are planning to buy a jumbo flat, you would have to buy one from the resale market. Jumbo flats can typically be found in Woodlands and Yishun. Jurong East, Bedok and Tampines are also estates where you may find prebuilt jumbo flats.

Occasionally though, you may also find a rare jumbo flat outside of these estates and these are likely the result of previous flat owners who have utilised the HDB conversion scheme.

Read Also: 5 Things You Need To Know Before Buying An Older HDB Flat With A Lease Of Less Than 50 Years

What is The HDB Conversion Scheme?

A rarely-utilised scheme, the HDB Conversion Scheme allows you to join two adjoining HDB units into one single unit, effectively creating a jumbo flat. Only 3-room or smaller flats are eligible for this scheme.

To be eligible to do so, you need to either buy two flats that are next to each other or buy the adjoining flat next to your existing flat. Before proceeding to buy the flat(s), you will need to seek HDB’s confirmation that the flats you are intending to convert are suitable for conversion.

To convert the two flats into a single unit, you need to construct at least 1 opening of at least 1 metre by 2 metres between the 2 units and remove the PUB meters from one of the flat.

Are Jumbo Flat Worth Buying Or Converting?

Before you covet your neighbour’s flat, you should be aware that there are some limitations to converted flats. Once converted, the flat is considered a single unit and cannot be subdivided in the future. Additionally, if you have purchased the adjoining unit, you are subject to a Minimum Occupancy Period (MOP) of 5 years and the resale levy when you sell the converted flat.

While jumbo flats have made the headlines for their luxurious renovations as well as their million-dollar price tag, it’s worth noting that they are also more expensive because they are bigger. If you consider the cost that you are paying on a per sqft basis, jumbo flats may not actually be more expensive than regular HDB flats. Thus, depending on your existing unit and your original cost paid, it may not always make financial sense for you to buy over your neighouring unit and convert into a jumbo flat.

Read Also: How Much Can You Save By Opting For A BTO Flat Over A Resale Flat

How Much Does A Jumbo Flat Cost?

Currently, the price of a jumbo flat range from over $600,000 to over $1,000,000, with most units selling for around $800,000 to $900,000. The actual price varies depending on the remaining lease and location. As most jumbo flats were built in 1990s or earlier, they tend to have remaining leases of 60 years or less. This may affect your ability to finance the flat if the remaining lease is insufficient to cover the youngest buyer until the age of 95.

The other option is to buy over the adjoining 3-room HDB flat under the Conversion Scheme from your neighbour. Depending on where your existing flat is, this may be a viable option as the average resale 3-room flat costs about $328,000. You may also purchase two 3-room flats that are eligible for the Conversion Scheme in a single transaction. However, if you are buying both units at the same time, you need to ensure that the two flats qualify under the EIP/ SPR quota restriction for your block/ neighbourhood. The EIP/SPR quota does not apply if you buy your neighbour’s flat.

This article was first published on 7 September 2020 and updated with new information.

The post What Are HDB Jumbo Flats And How You Can Own One? appeared first on DollarsAndSense.sg.