Freehold vs Leasehold: Can You Really Prove Which Is Better? (Part 1) 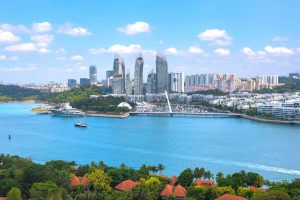 This article is republished with permission from Stacked Homes.

In the wake of the Falkland Campaign that waged between Argentina and the United Kingdom 38 years ago, Margaret Thatcher said this.

“There is no prouder word in our history than ‘freeholder’”.

And that is a notion that has rung through the ages, with those in power knowing full well that the key to making people feel a sense of belonging is through home ownership.

It’s something that has to be earned through hard work – which gives people a sense of security when they have achieved it.

Furthermore, it gives people a stake in the country, which in turn improves family ties and bonding.

Unsurprisingly, this was a key point in Singapore’s history, where the PAP believed too that home ownership would drive national stability.

But as of recent years, people are starting to question this aspect of real estate.

Mainly because the freeholder owns the land on which the property sits and charges the property owner a ground rent – an annual fee, which is meant to reflect the value of staying on the land. In the past, ground rent was set at zero or for a nominal fee.

(Not that Singapore doesn’t have such an arrangement (ground rent aside) – Spring Grove is a prime example.)

But now the biggest problem is the ground rents have been rising each year – some owners can see their ground rents rise to more than £10,000 (S$17,617) a year over the next four decades.

Thankfully, we don’t face the same situation in Singapore.

But this really begs the question:

Why do people often have such a negative impression of leasehold property in Singapore?

Is it because the real feeling of ownership is tied to the length of the lease?

Or is it just something about having to pay a 6/7 digit figure for a property that you don’t own forever – even if the average human lifespan doesn’t go beyond 99 years.

Unfortunately, I can’t draw on any client experiences because I am not a real estate agent.

But I’ve heard on many an occasion from people that I meet – that freehold property is a much better investment.

So today, my aim is to explore the much discussed topic amongst Singaporeans:

Freehold vs leasehold – which is a better purchase?

And because this is such a massive topic, I’ve decided to split the article into two parts.

Part 2: Diving deep into the numbers to analyse which is better.

It’s been a long introduction, so let’s get right to it!

You Don’t ‘Fully Own’ Freehold Properties

This might surprise some people, but yes, just because you’ve forked out that extra quantum for a freehold property doesn’t necessarily mean you own it outright.

First example. Say you’ve been staying in a freehold property at Pasir Ris for the past 10 years.

One fine day, the government comes knocking and says that due to the latest expansion works on the Cross Island MRT, your property has to be torn down to make way for underground tunnels. Sadly, you’d have no choice but to move.

It’s a rare scenario – and while the government does its best to prevent displacing unfortunate residents, we should know that it is always legally possible due to the that was mandated in 1966.

Now because there is no more freehold land from the GLS programme for developers to purchase, they have no choice but to resort to the residential market to top up their freehold land bank.

In our study on 87 en bloc condos, 80% ofthe developments all held a freehold status – a pretty significant number.

While one reason could simply be attributed to the point above, the second reason probably has to do with the fact that developers have to top up the leases for collective sale sites that are leasehold.

As you can imagine, that is not a small chunk of change at all.

And although some might argue that 80-90% (depending on property age) of signatures are needed before the sale can actually go through, it’s a possibility that shouldn’t go unnoticed.

Why Freehold Land Is Prized So Highly

One big reason why some people feel freehold properties are more valuable than leasehold is because the Government has stopped offering freehold land in the Government Land Sales (GLS) programme.

So any new launches from a GLS land moving forward will always be a leasehold project.

Naturally because of the laws of demand and supply, this just means freehold properties will be in more demand.

This brings us to our next point.

What Is The Value Of Leasehold Land?

So how much less does leasehold land cost than freehold land? And how does the Government actually calculate the value of the remaining lease on a piece of leasehold land?

Generally speaking, the value of a piece of land will vary accordingly with its tenure – obviously the land value will be higher if the remaining lease is longer.

*Okay Captain Obvious, could you be any more useful?*

Well, introducing the wonders of “Bala’s Table” – a discounted values table that shows the value of a piece of land with different lease terms remaining as a percentage of its value assuming it were freehold. 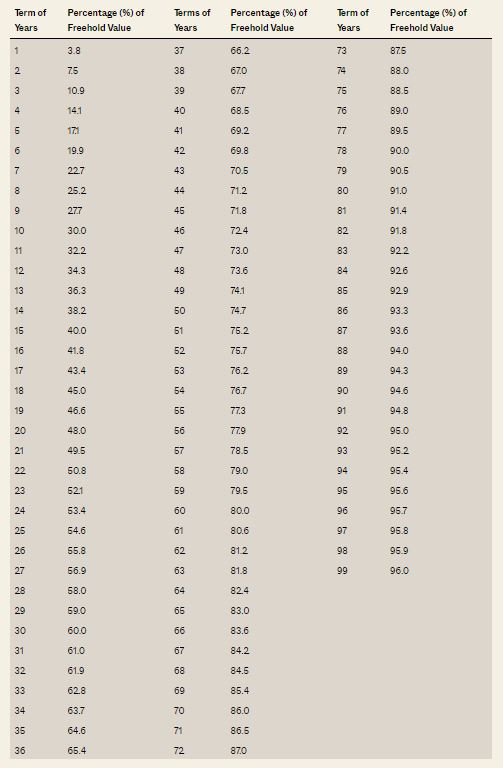 If you were curious about how the name “Bala’s Table” came about, it is believed to have been done by a Land Office employee by the name of Bala. That stuck and has been the reference name for the table in the real estate industry ever since.

Okay enough on the history lesson, here’s how you use the table.

This works for lease top ups too.

There are other rates too, but we’ll leave that for another day.

The next most important point that you’ll have to understand is this – the value of land does not fall at a constant annual rate as its lease period falls. 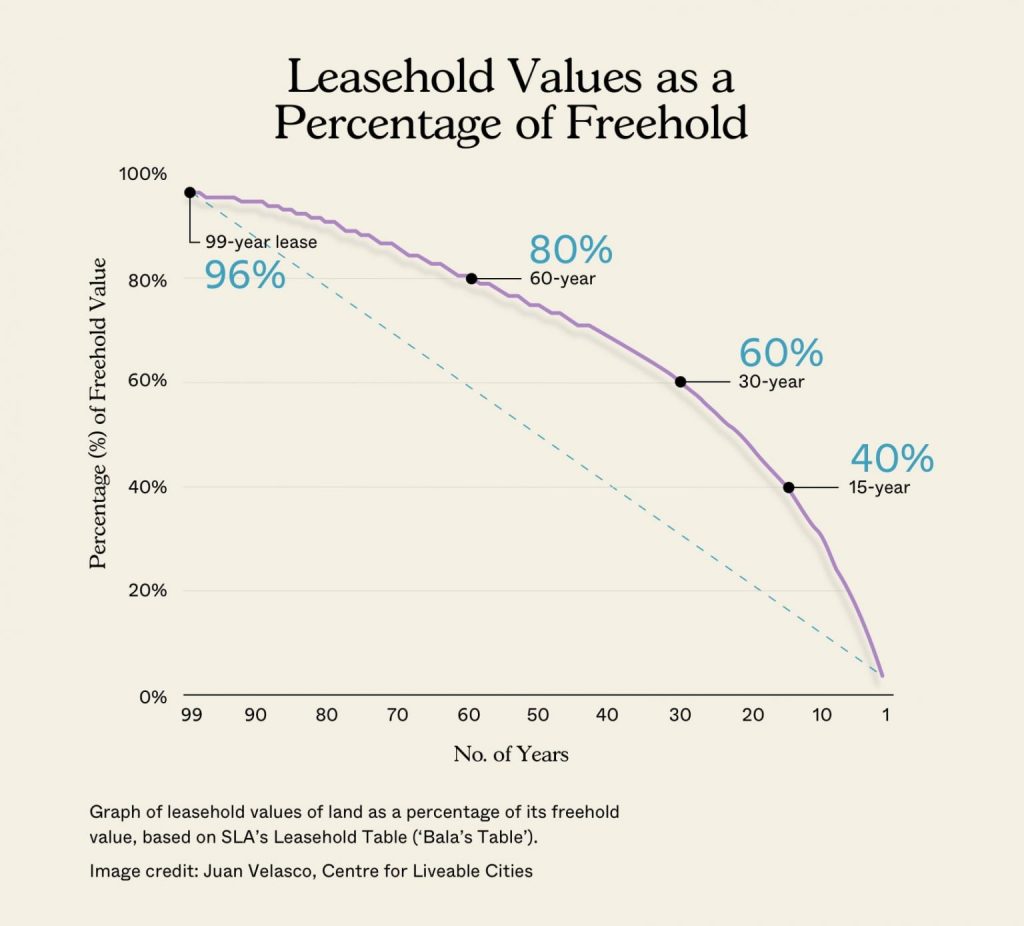 As an example, suppose the rental income from a 99-year leasehold land is $100 per square foot per year, the owner will be owed $100 PSF every year for 99 years.

But because of the time value of money, $100 today will not be worth the same 99 years later.

Hence the reason why the first 10 years will have a much higher present value of total land rent as compared to the last 10 years of the lease.

So to get the present value of the land rent in one lump sum, the future rental payments of $100 PSF per year must be discounted to a rate close to the opportunity cost of the money.

I won’t go into too much detail on the calculations, but know that there has been talk about updating the leasehold table in recent years by Cushman & Wakefield.

The Other Nitty Gritties Of Leasehold Land

As long as you are investing for passive rental income – leasehold property will always have the advantage over freehold properties.

Very simply because there is usually a premium of between 10 – 15% on freehold properties.

So because the formula for rental yield involves the cost of the property, the higher the cost the lower the yield would be.

Also, unlike the reasons behind a buyer purchasing a property that is freehold/leasehold – tenants do not give two hoots about the land status of the place they are renting.

It’s a simple concept – if a tenant had to choose between two condos, one freehold and one leasehold (with all other things equal), they will obviously choose the one with the cheaper rent.

No tenant in the right mind is going to pay more just because it is freehold.

With the recent CPF changes – it has now moved from how many years left on the lease to whether the lease can last you for your lifetime (95 years).

If you meet this criteria, you can use your CPF to pay for the property up to its valuation limit.

However, no CPF can be used if the remaining lease is less than 20 years (lowered from 30 years previously).

That’s the end for Part 1 of our series on freehold vs leasehold property. In Part 2 we’ll be looking more into the numbers to compare and see if there can be an answer to this age-old debate. Read it here.

The post Freehold vs Leasehold: Can You Really Prove Which Is Better? (Part 1) appeared first on DollarsAndSense.sg.