Should You Dollar Cost Average (DCA) Or Lump Sum Invest Into Bitcoins Now? 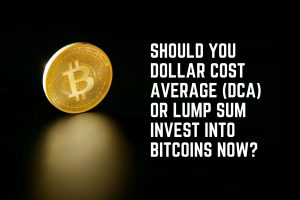 The case for investing in Bitcoins has been growing over the years. As an asset class, Bitcoins have been around for over 12 years now. Of course, cryptocurrencies have also grabbed the collective attention of global investors with returns that can only be described as out of this world.

While both these things don’t necessarily add to its legitimacy, conversations about Bitcoins are becoming more mainstream. For example, we’re discussing Bitcoins today in this article on DollarsAndSense. And it’s not just us either.

Almost every media, whether finance-focused or not, have talked about Bitcoins. Similarly, financial institutions and companies in this world have probably had to discuss Bitcoins. (Inexhaustive) case in point:

In short, Bitcoins don’t look like they’re going away any time soon. As a retail investor, how should we invest in Bitcoins?

Read Also: 5 Digital Currencies You Can Invest In Besides Bitcoin (And Their Performance In 2020)

The two main strategies of deploying funds into any investments is either to dollar cost average (DCA) into it or invest a lump sum.

Dollar cost averaging is a strategy used to spread out our risk of timing the market. This means investing a regular amount over a long period regardless of price fluctuations. Lump sum investing is exactly the opposite. Using this strategy means we pour in all our money at one go.

While both investing strategies have their pros and cons, we can think of a few reasons why dollar cost averaging into Bitcoins makes better financial sense for now.

Why Dollar Cost Averaging Into Bitcoins May Be More Sensible

If you’re an ordinary investor like us, then ploughing a substantial sum of money in an asset class may not be wise. By dollar cost averaging, we can get started in a small way while trying to gain knowledge of the asset class.

If prices soar and Bitcoins become mainstream, at least we got started and can continue investing to average out our price. If Bitcoins turns out to just be a short-lived hype, we would not have ploughed a substantial amount to start with. And, as we continue gaining more knowledge about the asset class, we may realise it’s not something we should be investing in or it’s something we should invest more in.

Read Also: Bitcoin VS Ethereum: What Is The Difference Between These Two Cryptocurrencies?

The main reason why people lump sum invest into the market is because of the eternal bull run – coupled with the fact that no one can predict when a crash will happen. Since the market has been going in one direction in the past 100 years, and we don’t know when the best time to invest will be, investing lump sum will usually give us the best outcome.

Even if we are the unluckiest investor in the world – as illustrated by Endowus – and invests a lump sum right before each of the last 5 market crashes, we would still be sitting on an annual return of more than 6.3% over nearly 40 years.

However, this doesn’t really work out for Bitcoins (at least not for us). 12 years of track record doesn’t really compete well against 100 years for stocks. An example to back our point of view is the Tulipmania craze. An Investopedia article notes that Tulips were first introduced to Holland in 1593 and the bubble for the asset eventually burst in 1637 – without ever recovering (obviously).

Again, we’re not trying to say blockchain technology isn’t here to stay or that Bitcoins may never recover from an impending bubble bursting. We’re just saying we don’t know and there’s little track record for us to rely on – at least compared to the stock market. This is why dollar cost averaging might be a more sensible option.

#3 Bitcoin Is An Extremely Volatile Asset, And You Want To Invest At The Average price

Ordinary investors usually learn about investments, such as Bitcoins, when the hype (and price) is at its greatest. To avoid investing into a hype, embarking on a dollar cost averaging strategy makes sense. 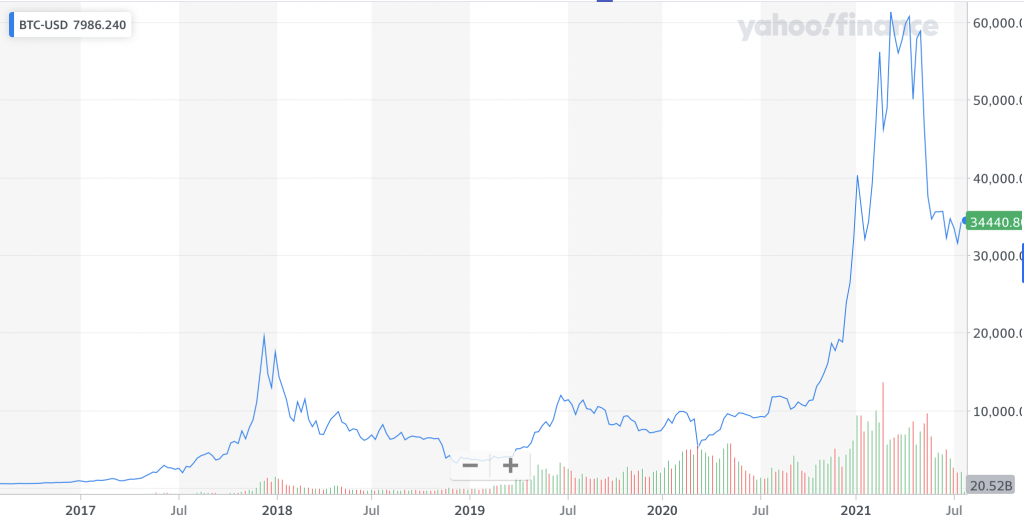 As we can see in the chart, over the past 5 years, the price of Bitcoins has soared in general. However, it has also crashed several times. Even small crashes, such as the dip in early 2020 would have been 30% to 40%. In 2021, prices of Bitcoins have soared to over US$60,000 and then crashed around 45%.

When investing in such a volatile asset class, we would love to invest at the lows and see huge profits. However, we also don’t want to be stuck with a really high price. By DCA-ing into Bitcoins, we get to invest at the average price.

Because it is so volatile, DCA-ing also reduces a lot of stress of holding the asset class. This way, we can sleep more soundly at night.

#4 If You DCA Into Bitcoins, You Don’t Have To Leave Any Money Idle

Usually, choosing to dollar cost average into our investments means we invest $100 for 12 months when we actually have $1,200 to start with. While we enjoy the benefits of dollar cost averaging, the main downside is leaving a big chunk of our money idle.

However, choosing to DCA into Bitcoins means we can be fully invested – while switching out some existing investments into Bitcoins on a regular basis.

Read Also: 5 Ways You Can Invest In Bitcoin In Singapore With $100

The post Should You Dollar Cost Average (DCA) Or Lump Sum Invest Into Bitcoins Now? appeared first on DollarsAndSense.sg.