After my recent review on Grab's newest PayLater service, I decided to delve in deeper into the wider Buy-Now-Pay-Later (BNPL) scene and check out what their competitors are offering. This opened up an entire Pandora Box, and to be frank, I was caught off-guard by some marketing tactics I saw and the lack of transparency when it came to communicating late fees. It is no wonder that the rise of BNPL services have been raising concerns among the authorities, who worry that it might lead to customers being "at risk of spending more than what they have budgeted for".

There's been a lot of flak towards BNPL services lately. Even our national newspaper wrote a scathing piece on this over the weekend:

In this article, I'm going to teach you about the Pros and Cons of BNPL services, and to be fair, I'll also talk about the (hidden) costs or late fees that most consumers aren't aware of.

First of all, let me first caveat that I am not totally against BNPL services. Like any other financial tool, what's crucial is knowing how to use it right and what to do so that you avoid becoming a victim of it.

BNPL services are also preferable over credit card instalment plans, because their fees are ultimately lower than what you could rack up on your credit card bill.

Most credit cards in Singapore charge an average interest rate of over 25% p.a., and late payment fees up to $120. When you compare that to paying instalments using BNPL service providers instead, it is pretty unlikely that you'll rack up charges anywhere as high as these.

So is BNPL a better option than what we had in the past?
Probably.
2. BNPL does NOT make the item any cheaper

This is from what Pace's founder told CNA:

An item may have been too expensive previously but by splitting payment into three, the item is now more affordable and customers can manage their cost. - Turochas Faud

He should have been more explicit - the item now APPEARS more affordable, but the price of it has not changed.

You see, if you need to split payment into 3 tranches before a product becomes "affordable" to you, then that's likely not a product you should even be purchasing in the first place.

3. You may still incur late fees on BNPL

Another unexpected downside of using BNPL services to pay your bill is that your BNPL repayments adds to your monthly card balance, so there's a chance that you could risk maxing out your credit limit quickly if you're not carefully monitoring your expenses. This may in turn lead to subsequent repayments being declined by your credit cards, which then causes you to be late on your BNPL repayments.

Here's the costs of using BNPL services. I describe it as "hidden" costs in this graphic because they aren't always being transparently communicated to most folks: 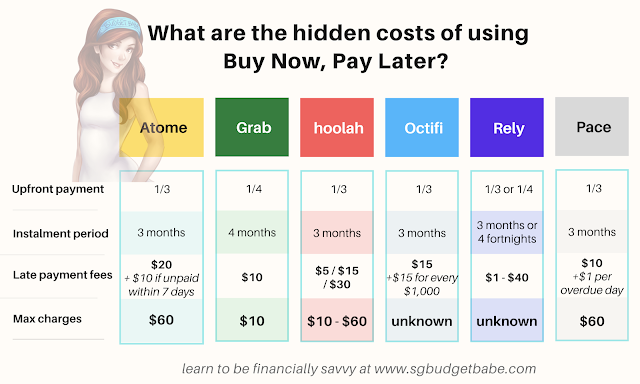 While Atome seems to be the most popular on social media, they also have one of the highest maximum charge at $60.

I'm not too sure about Octifi and Rely as there weren't any caps stated (but welcome anyone's inputs if you know otherwise, so I can edit and improve this piece further for greater information transparency).

Using Grab seems to have the lowest "cost" - even if you miss payments, the maximum you'll be charged extra is $10 (an admin charge for reactivating your defaulted account). That's it.

While the authorities are concerned,

[BNPL services might lead to consumers being] at risk of spending more than what they have budgeted for. Where consumers are not careful and overspend, such schemes can result in overstretched finances and cause potential financial distress. - Monetary Authority of Singapore

and even our dear friends at the national newspapers are trying to deter you from BNPL services, I wanted to point out that statements like these aren't exactly accurate either:

Why? Because this example only applies if you're using Atome.

Using the writer's example (as published in The Straits Times), defaulting or being late on paying your instalments for a $99 shirt would work out to be the following fees on each of the local BNPL providers:

But when you read that paragraph alone without this knowledge of the other BNPL providers and how much they charge, naturally, you might feel worried.
4. What I don't like about current BNPL services
While BNPL does offer certain benefits above (their predecessors of) credit card instalment plans, my main gripe with BNPL providers are that they generally make 2 mistakes:

I noticed this when a friend asked me if I had heard of Atome, as she had been seeing their ads everywhere (at MRT stations and social media), I challenged her to check if she knew about how much fees they charge...her blank expression told me everything.

But that isn't surprising, especially when you consider how the people / influencers / platforms who have been engaged to promote Atome's services to the masses are raving about its benefits, less is known (or being communicated) about their hefty fees - and I certainly don't see many influencers talk about it in their sponsored posts.

FYI, Atome charges a flat $20 late repayment fee, and another extra $10 if you do not pay the outstanding amount + a $20 administrative fee...within 7 years. This is capped at $60.

So if you're splitting the purchase of your $60 Sephora purchase via Atome, take note that there's a good chance you might end up paying twice of that...unless you're financially savvy enough to dodge the fees.

Let's talk about why this is happening, and I feel a lot can be attributed to the way some of these services are currently being marketed to consumers, which I feel borders on promoting consumerism irresponsibly.

Let's just look at what happened with my friend, J. She was introduced to Atome while shopping at Sephora, when a sales promoter approached her to say if she were to download the Atome app, she could get a $X voucher off their purchase and also pay less for the item.

The sales promoter literally stood next to her, breathing down her neck while waiting for her to download the app and complete the purchase.

But what my friend didn't know, was that it was in fact an instalment plan.

She was misled into believing the app was somewhat like a discount coupon platform, so imagine her frustration when she found out much later that the purchase had been spilt into instalments on her credit card.

Another friend of mine was introduced to it online, via Instagram. She saw influencers promoting it, talking about how they used it to pay less for their items, and hence was motivated to do the same.

Take a look at some of these online sponsored posts and see if you can spot what's missing: 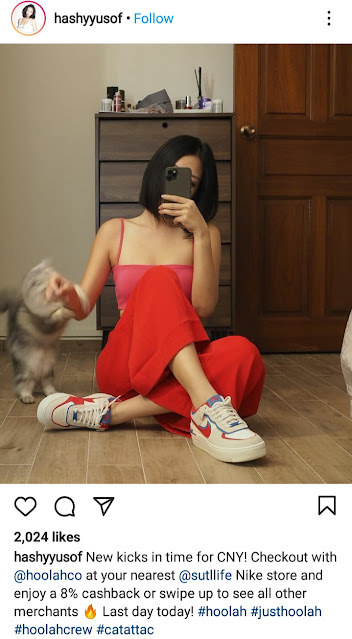 Did you spot it?

The posts pushed several hooks including:

Notice that none of the influencers talked about the potential repercussions of using the service, nor did they warn you about the late fees that you might incur if you were to miss repayments.

Now, I've already said that BNPL can no doubt be a good tool for consumers who are responsible with credit. However, the same sword cuts the other way - it could also lead to irresponsible spending beyond one's actual means because of the impression that items are now "cheaper", which makes you feel less pain when paying for them.

Unfortunately, many of the BNPL providers have chosen their go-to-market strategy by engaging influencers or ads that only talk about the benefits.

This is disappointing, and that's where a major problem lies.

Among all the BNPL players, only Grab made their fees clear upfront on their website. With the rest, looking for details on the late fees and repercussions of missing payments on their website felt like I was digging around for a needle in a haystack, so I've consolidated it for you guys here:

I'd argue that BNPL providers need to exercise more responsibility in their marketing and make it clear what are the potential downsides of using their service. However, none (except Grab, see this post) puts that upfront on their main page for you to see. You'd need to (i) know that there are fees involved and (ii) go digging to find out how much.
If you're like my friends who didn't even know BNPL services have fees too, then you'd be left in the dark until you get slapped with a late fee charge.
How would you feel?

7. Why the regulators are concerned

Many more questions about the BNPL model have emerged, such as whether consumers might be spending more than they can afford and hence accumulating unnecessary debt.

In Australia, the regulators have raised concerns about how 1 in 5 BNPL were missing payments and some were facing financial hardship. The leading BNPL player, Afterpay, even earned 25% of its revenue from late payment fees.

Aside from MAS, the regulators in the UK and Australia are also starting to review and introduce new rules for BNPL.

If consumers are not being shown an informed choice with the right type of advertising, it might thus end up attracting the (wrong) type of profiles who will later encounter issues when they shift their purchases to BNPL, mostly because they don't understand the product or how to use it well without harming their own financial health.

8. TLDR: Use BNPL services wisely
Now, there's no doubt that BNPL offer you an interest-free option to pay for your purchases, but so do credit card companies.
Although you won't be paying any interest charges to BNPL providers, you will need to be vigilant in order to avoid paying late payment or interest rates to your credit card issuer. Are you?
If you're not good with money in the first place, then linking a BNPL service to your credit card could very well be the start of a slippery slope to long-term debt. Unless, of course, you can guarantee that you will definitely be able to clear the debt once it is on your credit card...and in full at the end of the month.
If not, be prepared to pay a hefty interest rate of ~25% p.a., and late fees up to $120 for every month that you continue to drag repayments. Don't become a victim of rolling fees like what the guy (at the beginning of my post) experienced!
An alternative way would be to link BNPL with your debit card instead so that you'll be subjected to the enforced discipline of regular repayments made with money that you actually have...but then you'll lose out on cashback or rewards, so where's the fun in that?

At the end of the day, you'll do good to remember that BNPL plans are still debts to be repaid, with late fees and charges imposed if repayments are missed. So be smart about using them.

If you're not...then it might be best for you to avoid them entirely.

If you still wish to use them anyway, here's a guide on using them responsibly - sponsored by a BNPL provider (Grab PayLater) who agrees with me that responsible usage is key, and wants you to learn how you can best use BNPL without incurring any fees.