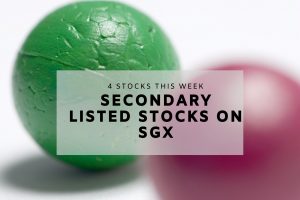 According to the Singapore Exchange (SGX), there are a total of 29 companies that are secondary listed on the SGX. A secondary listing allows companies to have their shares traded in multiple countries.

Some of us may already know that four prominent companies currently on the Straits Times Index (STI) are secondary-listed companies. These are Jardine Matheson Holdings (JMH), Jardine Strategic Holdings (JSH), Hongkong Land and Dairy Farm.

JSH, which is poised to be merged into a simpler entity within JHM (who owns about 85% of the company), will soon be delisted and also removed from the STI constituents from 13 April 2021.

Other than these, there are also other global companies that have a secondary listing on the SGX.

With a history spanning more than 170 years, Prudential (SGX: K6S) is an international financial services group with a global footprint, in Asia, US, UK and Africa. The group has over 15 million customers in Asia and Africa, delivering savings, health and protection solutions.

Prudential also owns Jackson Life Insurance Company, one of the top annuity providers in the US, and eastspring investments, a global asset manager with close to US$248 billion in AUM, across equity, fixed income, multi asset, quantitative and alternative strategies.

Most investors will not be unfamiliar with JMH (SGX: J36) – as one of the constituent companies in Singapore’s STI and a holding company of many other companies.

As mentioned above, JMH has also announced that it will acquire the remaining 15% stake in JSH. This will mean that JSH, which is another secondary listed company – will also be delisted from the SGX. In addition, JMH also owns Hongkong Land, Dairy Farm, Mandarin Oriental and Jardine C&C, which are also secondary listed companies on the SGX. JMH also owns other companies, including Jardine Pacific, Jardine International Motors, and Astra.

JMH has its primary listing on the London Stock Exchange (LSE), as well as two secondary listings – on the SGX and the Bermuda Stock Exchange. JMH has a market capitalisation of US$46.2 billion.

Tokyo-based Nomura (SGX: N33) is a global financial services group with more than 26,000 employees spanning more than 30 countries. It has retail client assets of over ¥121.0 trillion (S$1.5 trillion) and net assets under investment through investment trust and investment advisory businesses of ¥61.2 trillion (S$750 billion).

Nomura has a market capitalisation of ¥1.9 trillion (S$23 billion) Nomura is listed on the Tokyo Stock Exchange, Nagoya Stock Exchange and SGX, as well as on the NYSE.

In the year-to-date, Nomura’s share price on the SGX has also been flat – perhaps signifying illiquidity. On the Tokyo Stock Exchange, its share price has appreciated 7.3% within the same time.

Malaysia-based IHH Healthcare (SGX: Q0F) is a leading healthcare provider in Malaysia, Singapore, Turkey and India. It also has a growing presence in the Greater China region, and an expanding network across Asia and Central and Western Europe.