In the U.S., the strong market sentiment is filtering to its small mid cap space with Russell 2000 hitting record high last week. For those readers who are looking for Singapore small caps which are overlooked by the market, Jiutian Chemical (“Jiutian”) may be an interesting company to consider. Jiutian caught my attention as it has generated two strong quarters of net profit, reversing from losses recorded in FY2019.

Based on Figure 1 below, Jiutian’s main product is DMF. It is the second largest DMF producer in China with an annual production capacity of 150,000 tonnes. DMF uses dimethylamine (DMA) as a feedstock. DMF, in turn, is a feedstock in the production of polyurethane (“PU”), a key component in the manufacture of consumer goods such as leather products and shoe soles, as well as feedstock in the production for pharmaceutical and agro chemical products. DMF is also a universal industrial solvent that can be used as an absorbing agent mainly in electronics, acrylic fibre and pharmaceutical products

For the other products such as Monomethylamine (MMA), based on a KGI report dated 19 Nov 2020, MMA can be used in various applications such as for lithium batteries.

Jiutian through its 74% stake in Anyang Jiujiu Chemical Technology Co, has a production capacity of 140,000 tons of sodium hydrosulfite (“SH”). According to Jiutian’s annual report 2019, Anyang Jiujiu is the most integrated and second largest manufacturer of sodium hydrosulfite. Jiutian plans to restart SH plant by 1H2021, with one line producing SH and 3 other intermediate products, and discussion is in advance stage to modify the second line with a potential JV partner for other more profitable products. 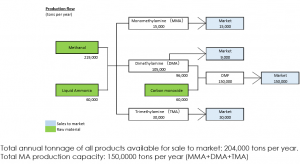 So why the interest in Jiutian?

Jiutian has six interesting aspects which catch my attention.

This stems from various aspects. Firstly, China’s economy has bounced up rapidly from the sudden economic shutdown in 1Q2020, resulting in strong product demand experienced by Jiutian’s customers in traditional industries like Polyurethane, animal feed and pesticides, fuelling demand for DMF. It is noteworthy that Caixin Nov 2020 manufacturing PMI readings are at a decade high. This comes on the heels of China’s official manufacturing PMI released on 1 Dec 2020 which are at more than a three-year high.

Thirdly, according to company, there was a general improvement in export market for China’s manufacturers as most other export-oriented countries have not regained manufacturing capacity due to Covid 19 disruptions. This has resulted in higher demand for their products used to produce goods for export

Fourthly, Jiangshan Chemicals, the second largest DMF producer in China, has closed its production facility in Jiangshan City, Zhejiang due to urban planning.

Based on Chart 1 below, DMF’s prices have soared this year with spot prices hitting almost RMB12,000 / tonne in early Nov. It is back to around RMB8,867 / tonne now (Click HERE). Even at current price, it is already around the highest level since Jan 2014. 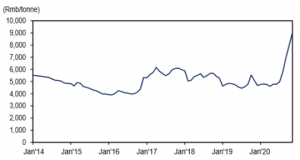 According to company in their Nov results briefing, it mentioned that raw material cost, mainly methanol and liquid ammonia, remain low given low global energy prices and excess capacity in China for methanol. Chart 2 corroborates this point given that methanol price seems to be at the low last seen in 2018.

3. Favourable demand and supply dynamics over the medium term

Based on KGI’s report, China’s top five DMF producers produce around 500,000 tons per year. Demand for DMF has stabilised at slightly above 500,000 tons annually for the past four years. 180,000 tons of DMF annual supply has been removed from the market due to the closure of Jiangshan Chemicals’ DMF production plant in May 2020, resulting in demand exceeding supply.

Similarly, from KGI’s report, Hualu Hengsheng (100,000 tons) and Henan Xinlianxin (200,000 tons) are only expected to commence production in 4Q2020 and 2022 respectively. Therefore, the medium-term supply and demand dynamics continues to look favourable for DMF producers.

Company intends to increase its efficiency and utilisation rate for DMF / MA plants, from the current 53% / 96% to high to full utilisation by end 2020. If materialised, this should have a positive impact to Jiutian. In 3QFY2020, even though Jiutian is closed for 20-day routine maintenance, 3QFY2020 net profit jumped to RMB51m, the highest quarterly profit since its IPO. In 4Q, there is unlikely to be such a long maintenance period (if any). Coupled with stronger quarter on quarter DMF ASPs, it is likely that 4Q should see another blockbuster quarter in terms of profits.

UOB Kayhian is the only broker with a rated report on Jiutian, with a target price of $0.180 and a FY2021F net profit estimate of around RMB361m. If Jiutian can generate a net profit of RMB361m for FY2021F, given the closing price $0.088, it is only trading at 2.4x FY2021F PE. In addition, UOB Kayhian estimates with Jiutian’s strong free cash flow generation, its net cash is likely to increase from 3.1 S cents in 2019 to 4.6 S cents in 2020 and 9.2 S cents in 2021. If all their assumptions and estimates materialise, Jiutian is currently trading at below its net FY2021 cash level! [UOB’s FY21F net profit estimate is based on DMF ASP at around RMB7,000 / tonne. i.e. there is a good buffer between its estimate and current price.)  Readers can refer to the analyst reports HERE.

KGI does not have a rated report but estimates that Jiutian’s fair value may be around $0.144.

Based on Chart 3 below, Jiutian seems to be testing its support levels $0.088. This support region ($0.085 – 0.088) should be rather strong as it’s a confluence of Fibonacci level, uptrend line established since 2 Oct 2020 and historical support levels. It is encouraging to see that Jiutian closed at $0.088 after touching an intraday low $0.086 today.

Chart 3: Jiutian seems to be testing its support level

As usual, with almost all investments, there are risks involved. The below list of risks is not an extensive one. Readers are advised to do their own due diligence.

1. Cyclical business with checkered past

Jiutian is in a cyclical business hence results and share price fluctuate from year to year. Citing share price data on Yahoo Finance going back to Sep 2007, Jiutian traded to a high of $0.820 in Sep 2007 and is now trading at $0.088. Based on my personal manual compilation using data from its annual reports dating back to FY2005 through 9MFY2020, Jiutian is profitable 10 out of 16 years. Thus, its track record is not exactly stable or predictable and this may not appeal to risk adverse readers.

However, I wish to point out that it is likely that FY2020 is going to be a record year for Jiutian, judging from its 9MFY2020 performance. Furthermore, should UOB analyst’s FY2021 net profit estimate materialises, FY2021 will be another record year. 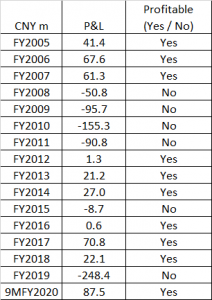 Jiutian’s current market cap is around $179m. Thus, this is a small cap stock where some funds may not have the investment mandate to invest. Furthermore, it is a S chip where the equity risk premium may be arguably higher.

This is my first time looking at Jiutian. Suffice to say that I am not that familiar in Jiutian’s fundamentals yet (It takes time to really know a company and its management). I have no access to management, and I am relying mostly on reported information in Jiutian’s power point slides and analyst reports. Readers should do their own due diligence and exercise their independent judgement.

In view of the favourable industry dynamics (high ASPs; relatively low raw material prices) and possible increase in utilisation rate heading into FY2021, it may be an opportune time to look into Jiutian. Nevertheless, I hasten to add that Jiutian has a checkered track record due to business cyclicality. Furthermore, its volatile share price and small cap S chip nature should also be taken into consideration, especially if you are a risk adverse reader.

P.S: I have already notified my clients to take note of Jiutian. I am vested in Jiutian.

Readers who wish to be notified of my write-ups and / or informative emails, can consider signing up at http://ernest15percent.com. However, this reader’s mailing list has a one or two-day lag time as I will (naturally) send information (more information, more emails with more details) to my clients first. For readers who wish to enquire on being my client, they can consider leaving their contacts here http://ernest15percent.com/index.php/about-me/