Crazy Rich Asians And The Meaning Of True Love 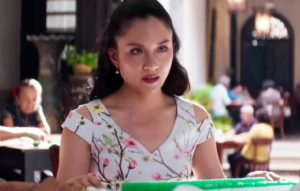 (Quick note before we start: I know, I know, it’s been 2 months since I published anything. Between family, church and my new job, I’ve had very little time to blog. But I’m on holiday right now with 8 hours to kill at a cafe, so I can finally write about something I’ve been meaning to for awhile. It’s quite different from my usual topics, but it’s something close to my heart. Let me know what you think.)

Like all my friends, I loved Crazy Rich Asians. I loved watching the ridiculous excesses of the Young family, the hilarious performances from Awkwafina, Ken Jeong and Jimmy O Yang, and feeling a little glimmer of pride whenever I recognized Singapore locations in a Hollywood movie.

One of my favorite scenes in the movie is the epic mahjong scene. Here’s a quick recap in case you’ve forgotten it:

Nick (Henry Golding) has proposed to Rachel (Constance Wu), against his mother Elenor (Michelle Yeoh)’s wishes. So Rachel invites Elenor to a game of mahjong, where she explains how Nick is stuck in a catch-22: Since Elenor will never accept Rachel, Nick can either marry Rachel and be estranged from his family, or follow his mother’s wishes and lose Rachel forever.

So Rachel decides to choose for him: She turns down Nick’s proposal, knowing that Nick will eventually find someone else that his family approves of and live happily ever after. Even though Rachel’s heart is broken, she loves Nick so much that she’s willing to suffer for him to be happy.

I love the hidden meanings embedded within that scene (awesomely deconstructed here), but I especially love its underlying message about the meaning of true love.

True Love Isn’t About You

Sure, Rachel loves Nick and wants to be with him. But above all, she’s willing to sacrifice her own happiness for the person she loves.

How can you tell when you truly love someone? Some people will say things like “because he makes me happy”, or “because she makes me a better person.” Those truisms are great, but they don’t tell the whole story.

The lady in the video has Alzheimer’s and has no recollection of who her husband is. Yet, keeping the promise he made to her on his wedding day, he sticks by her and takes care of her – even with no apparent benefit to himself. That’s self-sacrificial love.

The Piece Of Advice Missing From Most Weddings

Most people don’t like to hear about self-sacrifice on their wedding day. They prefer to stick to the sappy, romantic truisms about “cherishing each other” or “saying sorry when you’re wrong”. These are important, but they don’t tell the whole story.

One of the most controversial Biblical passages about marriage can be found in Ephesians 5:22-25:

“Wives, be subject to your husbands as you are to the Lord…. Husbands, love your wives, just as Christ loved the church and gave himself up for her.”

Most people get upset about the “be subject to your husbands” part. But they often don’t understand the full context: It’s not some male-chauvinistic call for wives to be blindly obedient to their husbands, but for BOTH spouses to give themselves totally for each other – just as Christ died on the cross for his bride, the Church.

I suspect that one of the reasons why Crazy Rich Asians strikes such a deep chord with so many people is precisely because of this underlying message.

In a world where we’re constantly told to put ourselves and our happiness first, it’s a timely reminder that true love – which cannot be bought – can only be found in the grit of self-sacrifice.