What Hugh Jackman Can Teach You About Negotiation 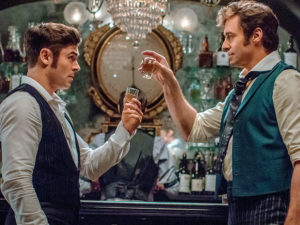 Okay, I admit it: I love The Greatest Showman.

Folks are talking about Crazy Rich Asians right now, but my Spotify list is still playing tracks from The Greatest Showman like “Come Alive” and “Rewrite the Stars”. I may or may not have jammed out to them while doing housework on several occasions (To my neighbours: Sorry you had to see that).

One of my favourite songs in the album is “The Other Side”. It’s not just a catchy song – if you look closely at the lyrics, it showcases some pretty good negotiation tactics.

If you haven’t seen it yet, here’s the scene from the movie:

Context: Hugh Jackman (who plays circus owner PT Barnum) has started a circus but is now ridiculed among the upper classes for his outrageous entertainment. Zac Efron (who plays the fictional character Philip Carlyle) is a young aristocrat who is fascinated by the circus despite his upbringing.

In the scene, Hugh is trying to recruit Zac to run the circus together. (I’ll use the actors’ real names in this post because they’re just easier to recognise)

Here’s how the scene plays out, and the negotiation tactics involved:

Hugh is showing Zac that he’s not playing games; he’s here to make an offer. Here, Hugh teaches us that the most important part of a negotiation isn’t about the words you say; it’s about trust.

Compare this to your friend who asks you out for coffee “just to catch up”, when he really wants to sell you insurance. Ugh. In those situations, everything you say is guarded. You don’t know if the things you say will be used against you, so you don’t open up.

Hugh, on the other hand, lays his cards on the table. It establishes trust, so they can focus on negotiating the best outcomes instead of second-guessing what the other party is up to.

Hugh then subtly says, “I don’t want to chase you down, I know you see it”.

In other words, “This offer is so obviously compelling that I don’t need to sell it to you. You can take it or leave it – totally cool either way.”

A phrase like this levels the power dynamic between the two parties, while still conveying interest in a good outcome. Take a job interview for example. It’s the difference between:

Every good negotiator works to level the power dynamic early on in the conversation. When you’re willing to walk away, you’re less attached to the outcome and more able to negotiate a fair deal.

Hugh then starts his pitch:

“You run with me, and I can cut you free,

out of the drudgery and walls you keep in.”

Hugh could have started out by saying, “This is a fantastic offer. Amazing package, great teammates, travel opportunities, a chance to get really rich…”

But instead of starting with the benefits, he starts off with Zac’s pain point: His boredom as a young aristocrat.

Buyers don’t care about what you have to offer. Buyers care about their own problems. Pain is usually a more effective motivator than pleasure.

4) Turn Weakness Into A Strength

Hugh already anticipates Zac’s objections, so he goes on to say:

“And if it’s crazy, live a little crazy.

You can play it sensible, a king of conventional, or you can risk it all and see.”

In other words, he turns his weakness (joining him will seem “crazy”), into a strength (it’s gonna be “crazy awesome”).

It’s a deadly effective marketing technique. Rather than cover up your faults, you make them front-and-centre and turn them into strengths. For example:

5) Play Up The Dissatisfaction With The Status Quo

What do you offer someone who has everything? You make them curious about what could lie beyond having everything. Hugh does this in the chorus:

‘Cause I got what you need, so come with me and take the ride

It’ll take you to the other side

Stay in the cage, or you’ll finally take the key

It’ll take you to the other side

People always want more, even if they’re happy with the status quo. Even billionaires constantly ask themselves: Could there be more than this?

The next verse and chorus is basically Zac’s looooong way of saying “No”:

So thanks, but no

I think I’m good to go

Most people hate hearing the word “No”. It hurts our egos, it discourages us, and it makes us not want to try again. But as ex-FBI negotiator Chris Voss mentions, you have to expect a “No” and make it work for you:

“Allowing people to say “no” makes them feel relaxed and protected… In such a state, they tend to better focus on your message”

Sometimes, people don’t want to say “Yes” because they’re afraid of overcommitting themselves. So they put up a blocker, but they actually want you to challenge it.

Think about the last time you bought something really expensive, like a car or a house. Did you say “YES I DEFINITELY WANT THIS” in the first 5 minutes? Or did you raise all objections you could think of and see if the seller could overcome them?

Expect a “No” especially when it comes to important negotiations. It’s not the end of the conversation; it’s just the beginning.

7) Ask Questions Instead Of Defending Yourself

When confronted with Zac’s “No”, Hugh could’ve responded with some clever counter-arguments. For example: “Here’s why I think you’re wrong: You’re not looking at the big picture, you need to factor in the opportunities, etc”.

But that would’ve made him sound defensive. Instead, he retorts with brilliantly-phrased question:

Now is this really how you like to spend your days?

Whiskey and misery, and parties and plays

In any negotiation, the power lies with the person asking the questions. By framing the conversation, it leads the other person to the conclusion that you want them to have, without having to convince them yourself.

8) Probe Until You Get To The REAL Reason

Up till now, Zac has been acting as if he doesn’t want the job because he’s comfortable enough with his life. But that’s not the full story. It’s only after Hugh’s probing that Zac reveals:

Disgraced and disowned, another one of the clowns”

In other words, the REAL reason for Zac’s hesitance is that he’s afraid of the humiliation.

In many negotiations, people will be too nice to tell you the real reason why they said no. They’ll say nice things like, “Now’s just not the right time” or “We love it, but we just don’t have the budget for it”.

Never be satisfied with the first answer. Keep probing and asking questions until you get to the root. It’s critical that you find out the real reason behind the “No”, so that you can either address it, or learn from it and move on.

9) Sell The Dream… But Give An Out

Notice all the hard work that Hugh has put in so far: Getting Zac’s trust, finding the pain point, framing his weaknesses as strengths, asking probing questions, finding the real objections….

Only now does he get into the hard sell:

But you would finally live a little, finally laugh a little

Just let me give you the freedom to dream

And it’ll wake you up and cure your aching

Now that’s a deal that seems worth taking

So many people jump to the hard sell early in the conversation, which leaves a bad taste in the buyer’s mouth. But in an effective pitch, the hard sell only occurs after the seller has done the upfront work to fully understand the buyer’s pain points and blockers.

To end it off, Hugh also gives Zac an out:

“But I guess I’ll leave that up to yooouuuuuuuu….”

This is a great way to end a pitch, because no one wants to feel forced into saying “Yes”. In a single line, Hugh throws the ball back into Zac’s court: Here’s all the compelling evidence, now YOU decide if you want to take advantage of it.

That stops Zac in his tracks, and he smiles. He agrees – in principle – to join Hugh.

Now, the bargaining begins. Hugh begins with a reasonable offer: 7 percent of the business.

“Well fair enough, you want a piece of all the action

I’d say 7 percent is pretty reasonable (would YOU give a new employee 7 percent of your company?). Yet, Zac is clearly an experienced negotiator – he leads with a ridiculous counter-offer:

“I wasn’t born this morning, eighteen would be just fine.”

He asks for more than double the initial proposal! Experienced negotiators often do this – they insult your initial offer, and then re-anchor the price to an extreme number. That way, any “concessions” they make will make them seem like they’re giving up a lot.

It’s an underhanded tactic, but you have to be prepared for it. In a job negotiation, think about how companies often come back with an offer that’s way below your expected salary range. If you’re weak, you’ll convince yourself that it’s a fair offer.

Luckily, Hugh isn’t thrown off. He calls out Zac’s ridiculous demands (“Why not just ask for nickels on the dime?”), which leads to successive counter-offers until they agree on a final figure of 10 percent.

Having agreed on a number, they do a toast and drink to the partnership.

Instead, a successful negotiation is about making sure that both parties walk away feeling like they got the best deal.

And that, my friends, is how you take it to the other side.

Now, I gotta get back to my housework and my Spotify playlist.