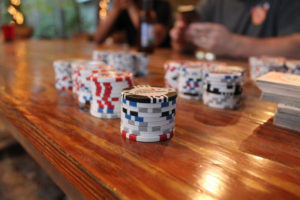 It’s 1.30pm and you’re just stepping out of the office for lunch. You’re slightly annoyed at yourself for scheduling a 12pm meeting. In the last 20 minutes, you had to clear your throat every 5 minutes to mask the increasingly audible noises coming from your stomach.

You normally have lunch at your usual fish soup place that’s a 10-minute walk away. But today, you notice a new fish soup stall which has just opened right next to your office building, and it’s way cheaper than your usual place.

However, you have no idea if this new stall is any good. It isn’t very crowded, there are no reviews, and the quality of your lunch is REALLY important to you.

What would you do?

This lunch conundrum reminds me of a classical philosophical problem known as Pascal’s Wager, argued by Blaise Pascal – a French philosopher who lived in the 17th century. According to Wikipedia, “Pascal argued that any rational person should live as though God exists and seek to believe in God.”

If God doesn’t exists and you believe in God, you’ll probably go through life making a lot of moral sacrifices, only to die at the end and realise that it was all for nothing. If God doesn’t exist and you don’t believe in God, then presumably you’d live the kind of life where there would be no eternal consequences, have loads of fun, and then die.

If you don’t like reading, here is a fun video explaining it by a dude with an Aussie accent:

Because I studied Economics and these things get me excited, here is a table with the relative payoffs:

Let’s study the payoffs of our two choices:

Therefore, from the perspective of pure, rational self-interest, the obvious choice is to believe in God.

2 Key Concepts We Can Learn From Pascal’s Wager

Now of course, Pascal’s Wager isn’t watertight. There are plenty of criticism of the argument, such as:

These criticisms are fine – there are plenty of counter-arguments against them – but they tend to overcomplicate the key concepts. When we focus on the gist of the argument, there are 2 concepts we can take away:

So back to our lunch conundrum. If we map out our choices and payoffs on the same table, here’s what we come up with:

Since the potential cost is relatively low and the potential benefit disproportionately high, a strategic bet would be to go for the new lunch place and hope that it’s awesome.

However, this is counterintuitive to most people. Since most people crave certainty, they will be more likely to not go for the new place. We live our lives wanting to remain in the status quo (the bottom right quadrant), never realising that we might be incurring a crazily high cost for doing so (the bottom left quadrant).

The costs and payoffs for lunch might be relatively benign, but think about how the stakes can go higher in choices such as business, investing, or applying for a new job. Most of these contexts have both the forced bet and the asymmetric payoff concepts.

For example, by saying “I’ll learn investing when I have more time”, you’re essentially choosing NOT to invest now (forced bet). That leads to either the status quo or missing out on some potentially huge gains (asymmetric payoffs).

Everyday Decisions and THE Decision

So the next time you’re faced with a decision, think about Pascal’s Wager. Can you map out your choices and payoffs to help you make a decision? What choice are you implicitly making by refraining from choosing? Which course of action will limit your costs but give you a disproportionately higher payoff?

And finally – if this is a useful framework for most decisions in life, what about THE decision in life – namely: Should you believe in God, or not? Something to chew on for the rest of the week