Before the markets can digest the news, the Singapore government came out with a new set of property cooling measures at about 7.30 pm yesterday evening (5th July 2018)

What happens next is that a slew of almost ready to launch projects was released at 8pm yesterday evening including the much reported Riverfront Residences in Hougang.

What was surprising was the speed of the execution:

The cooling measures by and large, from my point of view targets the developers more but also increases the tax revenues of the government.

ABSD, or additional buyer stamp duty, is an additional tax paid to purchase on top of the standard buyer stamp duty of nearly 4% (BSD is in a range of first $180k 1%, next $180k 2%, next $640k 3%, the rest 4%). For Singaporeans and PR purchasing their FIRST residential property it will still be 0% and 5% respectively.

For the rest it will go up 5% accordingly.

Refer to the following table: 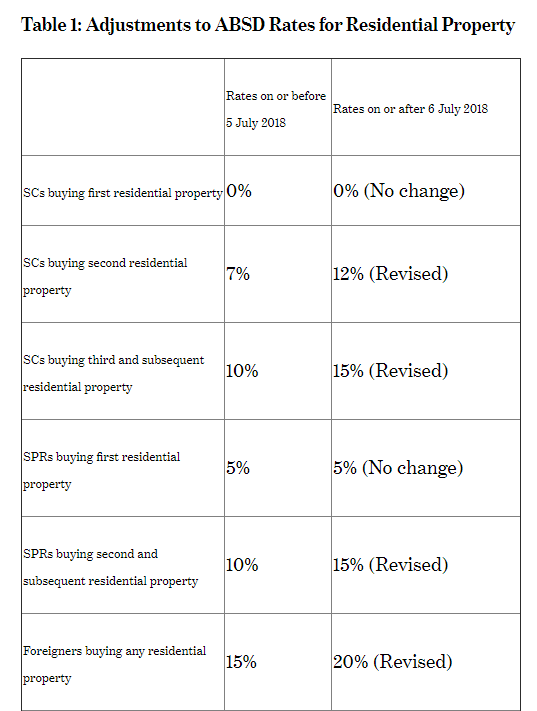 Raising the ABSD for developers by a lot

Government is also raising the ABSD that developers have to pay if they cannot sell all their units within 3 or 5 years. In the past few years since property peak in 2013, what hit the developers hard was the Qualifying Certificate (QC). This ABSD is different, and perhaps across the board.

QC affects more for foreign property developers. Specifically if the developer have non Singaporean as directors and shareholders, these listed companies are considered foreign developers. Then again most developers have foreign shareholders.

The developer must develop and compete the site within 5 years after it is bought and sell all its units (100%) within 2 years of completion.

If the developers failed, they can extend the sale period by 3 years BUT they pay the following during the period of extension:

As entities, developers will also be subject to the ABSD rate of 25% for entities. Developers may apply for remission of this 25% ABSD, subject to conditions. This used to be 15%.

The developers are given 5 years to sell all the units (assuming all are license developers).

If there is one unit unsold, the developers pay ABSD on the whole land purchase price.

The difference between QC and ABSD here is that QC is levied on the number of units unsold, regardless of the size of the unit. ABSD is on the WHOLE land purchase price.

And to make things worse, the government slapped an additional 5% non-remittable ABSD on the developers.

Maybank expect a significant slowdown in enbloc transactions. This should address government concerns over potential oversupply in the medium term. The high upfront cash outlay will also weigh on project IRRs for new residential developments

Tightening of Loan To Value Limits

The government will tighten the loan to value limits by 5% for all housing loans granted by financial institutions.

Refer to the table below:

When you can borrow 5% less it means your down payment increases.

This affects you if you take a bank loans for your first property.

The Government Is Telling the People to Watch Out

It seems from the sentiments on the social media, the slew of En-bloc sales have signal to the people that developers think the market is conducive to release more projects.

The developers were trying to clear their stock since 2013, and they would not want to put themselves in the same situation.

So by bidding these high prices for old private, HUDC projects, with high plot ratios that are inefficiently utilized, the developers can create more smaller units and sell them at higher than their bid and construction price.

The signalling is that the developers don’t want the same situation and they believe time is ripe based on their expert knowledge of the local landscape.

The cooling measures makes the residential purchases think twice. The ABSD makes purchase more expensive. Whether it is more expensive depends on how much future discounts the developers will give.

The LTV impacts the cash flow of the property buyers. For the affluent this should not dissuade them. But for those on a tighter budget this will be a consideration.

The Government disagrees with the Developers.. But they Still Want to Participate in the Upside

The government is signalling the price should appreciate within a band that they are controlling.

The developers are jacking up the prices out of this band.

The early en-bloc sales are signalling some 10-15% price appreciation above some of the projects in 2013 peak.

Despite this, rental prices have been languishing.

However, if the developers are able to clear it, the government wants to increase their tax revenue as well.

The government in recent months have also offloaded certain attractive sites such as 2 at Bidadari Woodleigh and Holland V at record high GLS land price.

This is a bit confusing in that, they are communicating there is going to be some big supply coming, they would have withdrawn these sites.

This Hurts Even the First Time Property Buyers

The new Loan to Value of 5% more seems to affect bank loans from financial institutions.

This means that… if you decide to choose bank loans over HDB loans for your resale property, you need a greater down payment.

Another group that is greatly affected are the PR with non PR spouse, who wishes to settle down, and can only buy condos.

This will force them to put down more down payment.

This is prudent from the personal finance perspective of taking a smaller home loan and down paying more. You have lesser risk, your monthly cash flow is smaller as well.

However, for those who are tight on cash flow, this stops them from settling down, especially if they are non-Singaporean.

It will also make people consider HDB loan instead of bank loans.

No wonder the bank stocks was affected.

Do They Prefer Less Wealth Building Through Property?

If you add 2 things to the narrative:

You wonder if what they want to do is for the people to focus less on property, for a more rounded wealth building.

The constant communication that HDB land lease will run out shifts Singaporean’s attention towards private property as a way to build wealth.

How much the government prefer their citizens to build wealth this way is a question that perhaps will be clearer in the next 2 years.

We will see if they push more alternative form of investments out.

Want to read the best articles on Investment Moats? You can read them here >