How To Talk To Anyone Without Feeling Awkward 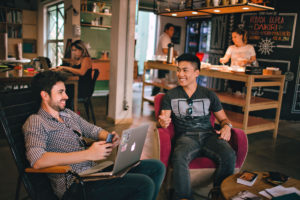 One of those changes is simple: I started a new job.

(Well, before that, there was also the researching, networking, applying, preparing, multiple rounds of interviewing, negotiation, tying up loose ends at the old job, doing a bit of travelling, catching up with old friends, etc. You can see why I didn’t really have the energy to blog these past 6 months).

Starting a new job is always tough. There’s a whole new environment and a whole new routine. It feels like you’re drinking from a firehose of information. There are trainings to attend, introductory meetings to schedule, the regular work that needs to be done…

And then, there’s the issue of socialising with your new colleagues.

We Love The IDEA Of Socialising, But We Hate To Do It

A friend and I observed that it’s really trendy to say “I’m an introvert” these days. (Conversely, I’ve only met maybe 2-3 people in my entire life who are self-declared “extroverts”)

So I’m guessing that we all love the IDEA of socialising, but most of us hate to actually do it.

On one hand, we’re all intrinsically hardwired to crave connection. We became the dominant species on the planet precisely because of our ability to form social structures, so our brains adapted accordingly.

Have you ever had a great conversation with someone, and then walked away feeling absolutely freakin’ awesome? That’s your brain releasing serotonin – the chemicals that reward you for making social connections.

Yet, when it comes to actually making friends and connecting with people, most of us absolutely hate the process. Whenever we feel like talking to someone, a mental script plays in our head:

“Okay, I’m going to say hi to this guy. Then he’ll say hi back. Then I won’t know what to say after that and it’ll just be really awkward. Okay, think of something really smart to say after he says hi. Maybe I should sayyyyy… okay the moment’s passed.”

Why are we so obsessed about coming up with the right conversational opener? Why do we overthink our social interactions until we’re absolutely paralysed?

Blame it on our conservative Singaporean upbringing, our addiction to antisocial digital devices, or unrealistic expectations that every conversation has to be witty, charming and hilarious. (Which we probably got from watching 10 seasons of Friends growing up)

The “Have A Conversation With Anyone” Experiment

So for the past couple of weeks, I decided to push myself to have a conversation with anyone and everyone I met. I figured that since I’m new at my job, I can use the “hey I’m allowed to be socially awkward and ask dumb questions” excuse.

This is what I do:

That’s it. I don’t pre-plan what to say beyond my initial greeting and question.

Most people don’t want to give a mundane opener like this because they think it’s cliched, or they’re afraid that the other party will think they’re boring.

But from my experience, even a mundane introduction leads to a warm, genuine connection 8 out of 10 times. It almost doesn’t even matter what your opener is. Usually, people are just waiting for someone to engage them. So if you actually take that first step, they’re usually happy to carry on the conversation.

What Do You Do When The Conversation Falls Flat?

80% of the time, this simple introduction leads to a lovely 2-5 minute conversation, which is more than enough to establish a friendship when repeated over the course of several weeks.

I used to think that these “bad” outcomes were my fault – that perhaps my opener was too lame, or perhaps I came across as annoying, or perhaps I had BO. (sniff, sniff)

But now, I’ve come to realise that I can’t control all my social outcomes even if I was the most charismatic person in the world. After all, it takes two to have a conversation – sometimes, the other person just doesn’t like/want to talk. Maybe he’s having a bad day. It doesn’t mean that you did something wrong.

So now, I just just say hi to everyone anyway, knowing that not all my interactions will work out.

Give it a shot. Worst case scenario, there’ll be some awkward silences that you’ll forget about in 10 minutes. But more likely, you’ll dramatically increase your odds of establishing a connection, getting that serotonin pumping, and making a few more friends.

If you’re experimenting with this this week, leave a comment to tell me about your experience!