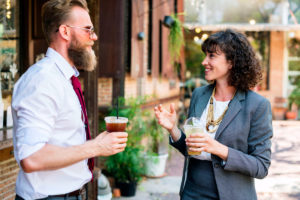 Soooo I was lucky enough to get a short work stint in London (long story), and I’ve been here for a couple of weeks. Here are some interesting observations I had:

One good thing about being in a totally new environment: I get to try little social experiments that might seem weird to my friends and colleagues back home.

And so this week, I decided to try to improve my social confidence.

Why Is Social Confidence So Important?

I’m an introvert by nature, and I actually hate small talk. I can fake it if I have to, but it usually feels a little forced and awkward. As I’m making small talk, my mind is always racing through a thousand different thoughts:

This reluctance for small talk has often led to other implications.

For example, I might come across as aloof or antisocial in the office, especially when I have lots of work to do. I can sit at my desk for an entire day, not talking to anyone, even though I’m surrounded by friendly, sociable colleagues.

Last year, when I was at an event with thousands of entrepreneurs who had paid hundreds of dollars to be there, I had all these mental barriers which kept me from talking to people. So I sat down, took out my phone, and checked my email. As I was doing it, I knew I was being lame. And yet, I couldn’t help myself!

Imagine what would have happened if I had simply reached out to just 3 people. Worse case, it would lead to a couple of awkward conversations. But the upside was virtually unlimited: I could have forged new partnership opportunities, come up with a new business idea, landed a new job offer – the possibilities were endless.

I knew I needed to get better at small talk. Which is where my little social experiment comes in.

I decided that I was going to get out of my comfort zone this week and interact with people I don’t know. To make it easier, I was going to start conversations with people who were paid to talk to me: Cashiers, baristas, waiters, security guards, etc. That way, if I bumbled and failed, I could walk away with zero consequences.

The rules of engagement were:

That’s it. Even if the conversation had ended there, I’d check it off as a success. The point was to force myself to interact with as many people as possible, and hopefully it would get more natural over time.

Over the past week, I’ve said “Hi, how’s your day going?” to dozens cashiers, baristas, restaurant servers, the security guard who works in my building, and an elderly couple I shared a table with.

Most people simply responded with a “I’m good, thank you!” and waited for my order. Some responded with “I’m good! And how are you?” which I took as a positive sign and asked my follow-on question. I found that when I slowed down my words (My first few interactions were along the lines of “Hihowsyourdaygoing”) and smiled, these tended to illicit better responses.

There were also some unexpected benefits:

These might seem like small wins, but adding them up had a profound effect on me: I started feeling more confident, stood a little taller, and smiled a little more. I’m hoping that with practice, the inclination to reach out to someone I don’t know will be so natural that I wouldn’t even have to think about it.

Now, I’d love to hear from you. What barriers do you have when it comes to talking to people? Do you think the “Hi, How’s Your Day Going” Approach would work for you? Let me know in the comments below.