Our STI has broken a one-month trading range of around 3,288 – 3,348. Where will STI and the other indices go from here? 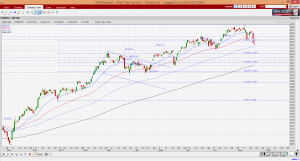 Hang Seng’s chart continues to be on an uptrend with no bearish divergences seen on MACD, OBV and RSI. Notwithstanding 20D EMA which seems to be trading sideways, the other EMAs are still rising. ADX closed 34 on last Fri amid positively placed DIs. With reference to Chart 2 below, Hang Seng continues to be on an uptrend. A sustained close below 26,150 negates Hang Seng’s (still relatively) bullish chart outlook. 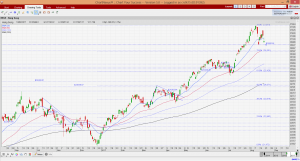 STI seems weaker than S&P500 and Hang Seng on a relative basis. Based on Chart 3 below, 20D EMA is turning down. The break below 3,288 points to an eventual measured technical target of around 3,228. Although 20D EMA is turning down, it is noteworthy that 50D, 100D and 200D EMA are still rising with a good degree of separation. RSI closed at 39.7 on last Fri which was the lowest seen since 10 Nov 2016. My personal view is that STI should find good supports around 3,228 – 3,236 and is unlikely to make a sustained close below 3,228 in the near term. 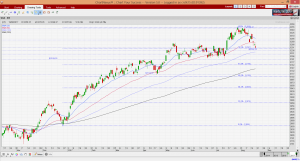 Based on the above charts, it is likely that S&P500 and STI may have limited near term potential downside, should their supports hold. Personally, I have bought in some more shares in certain companies, on weakness, given their near-term potential catalysts seem to remain intact.