In this write-up, I will structure it differently. To attempt to explain the price fall, I will discuss what has changed and what has not changed for GSS. However, I hasten to add that this is entirely based on my personal opinion / view. Some things highlighted below may have possibly changed without my knowledge.

Based on my personal observation, three things have changed which may have contributed to the fall in GSS’ share price.

Although oil prices are still trading around US$47 / barrel, our Singapore small mid cap oil stocks have fallen with the suspension of Ezion, (touted to be one of the most resilient small mid cap oil stocks by some analysts). For example, Mermaid and Ausgroup have slid around 15% and 6% respectively since 8 Aug 2017 (the last day which Ezion traded.)

Technology stocks such as AEM, Memtech, Venture have slipped 5 – 17 % from their recent highs. Coupled with point 1 above, this may put some selling pressure on GSS, as it has two business segments, viz. precision engineering (“PE”) business and oil business.

In addition to the aforementioned points, GSS’ bearish chart breakdown from its 4-month trading range $0.152 – 0.181 casts a pallor to its share price. (see Chart 1 below) 100D, 50D and 20D exponential moving averages (“EMAs”) are turning down with death cross formed between 20D and 50D EMA. ADX is 33, amid negatively placed DIs which is indicative of a trend. At the time of writing, GSS has slipped below its 200D EMA at around $0.141. In order to be less bearish, it should regain $0.141 in the next few days.

Notwithstanding the above bearish factors, there are two potential positive factors. Firstly, there seems to be a bullish hammer formation on 18 Aug 2017. Hammer formation is a bullish reversal pattern that follows after a steep decline but it requires confirmation. Confirmation can be either in the form of a long green candle, or a gap up with volume expansion. Thus, we have to assess whether GSS moves up in the next few days. Secondly, RSI has slipped to oversold level of around 23 which is the lowest last seen on 28 Dec 2015. 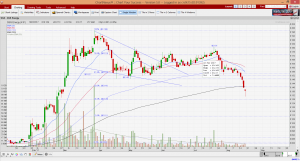 What has NOT changed?

1. First oil imminent –> likely to be in the next few months

Based on GSS’ latest results released on 14 Aug 2017, GSS stated that the preparations to commence production drilling in Trembul Operation Area are well advanced. With reference to an article on Jakarta Post dated 24 Jun 2017 (click HERE), GSS may commence drilling this month and start oil production in Sep.

1HFY17 PE revenue and net profit rose 27% and 57% respectively on a year on year basis to S$44.7m and *S$3.9m respectively. This arose as its PE business continues to win more orders from existing and new customers. GSS has moved to its new China factory this month and expects this new facility to increase its production scale, manufacturing capabilities and enhance cost and production efficiency. Management emphasised that they have stocked up inventory for this transition thus, the transition from the old facility to the new China factory is seamless and does not result in any loss of production capacity.

As with the other technology stocks, it is likely that 2HFY17F is stronger than 1HFY17 due to seasonal factors.

*Do note S$3.9m was the net profit for PE business, before it was set off against the O&G and corporate expenses.

Simplistically speaking, GSS trades at a substantial discount to its sector as the FY17F PE sector average is around 10x. Furthermore, it is noteworthy that GSS is a net cash company with approximately S$8.2m cash and negligible borrowings.

**The above is based on a back of the envelope calculation. As I am not an equity analyst, the above is purely my guesstimate and may not be accurate.

4. Market continues to price its oil business with zero value

If the above assumption that GSS’ PE business is trading at a substantial discount against its peers is true, then it stands to reason that the market is not pricing its potential up and coming oil business (Trembul Operation Area) with any value. Although I do understand that the investment community may be waiting for GSS to deliver on its oil business, before it ascribes any value to this segment, I think this segment should warrant some value too, as presence of oil is corroborated by historical data. According to the same article on Jakarta Post dated 24 Jun 2017, Nederlandsche Koloniale Petroleum Mij (NKPM), a subsidiary of Standard Oil Company of New Jersey, now ExxonMobil, initially explored the Trembul Operation Area and drilled around 307,000 barrels in 1917. The area reportedly has around 40.1m barrels of oil reserve. (Please refer to my earlier articles on GSS and GSS’ announcements on SGX for more details)

As usual, there are always risks involved, especially in small cap stocks with business operations in Indonesia. I wish to emphasise the following risks which have been mostly highlighted in my past write-ups.

It is noteworthy that this is the first time that GSS is operating this KSO contract. Notwithstanding that GSS has employed highly capable personnel in their oil and gas department, there may still be execution risks.

For those who have followed companies operating in Indonesia, you may be aware that there are things beyond the companies’ control, especially on project timeline.

Although there is historical data to corroborate the presence of oil in the area, it does not mean that GSS may necessarily strike oil. Failure to strike oil, or a lack of news flow in this segment in the next few months may spark another round of sell-off.

Given the above factors, GSS’ share price may recover from the recent bout of selling if it continues to deliver on its results and its oil production in the next few months. Readers may like to take note that Sydney, GSS’ CEO, last bought 1.4m GSS shares @$0.175 on 12 Apr 2017. GSS is planning to host its results briefing on 28 Aug 2017 and we may have more updates.

P.S: I am vested and have informed my clients on Fri (18 Aug) morning.