I've actually talked about ICOs before, but I just wanted to come back and touch a bit on this topic.

ICO stands for Initial Coin Offerings. In a nutshell, it is a digital Initial Public Offering (IPO). 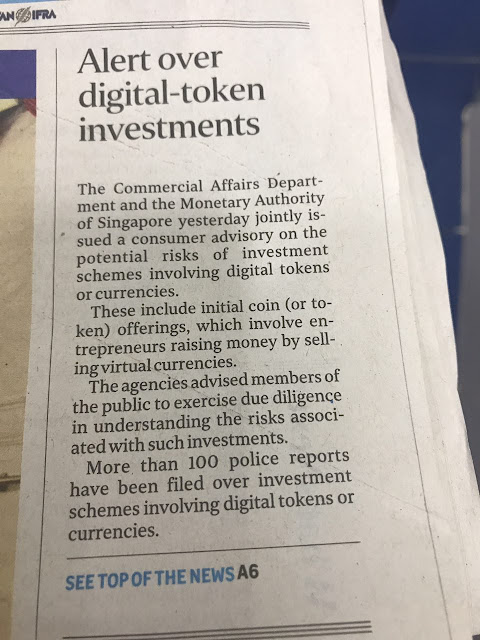 That was actually in the Straits Times, and I think it's a timely reminder that ICOs are really dangerous and risky.

And I'm not just talking about the risks in investing in a early start-up company. There are plenty and plenty of risks. One of the biggest ones is that it turns out to be a scam. Some people found out the hard way and lost $7.6m of Ether last month, which is now worth $13m. Madness.

And the lists goes on and on. Add in that there are also like 20 ways to get hacked or scammed along the way and you can probably realize by now that this is NOT a riskless path to be troding on.

If you currently only "invest" in fixed deposits and endowment products, this is DEFINITELY not for you.

tldr - PLENTY OF RISKS. If you can't handle the heat, stay out of the kitchen.

Now that we've got the MANY risks clearly spelled out, let's see why this is happening. Michael from Boxmining did a fantastic job in this video and that spurred me on to write this article.
The main thought that I have is that this does not prove a mania in cryptocurrencies. Why do I think that? I feel that the hype is actually surrounding the fact that average Joe investors like you and me can now actually get into and be involved in early round startup funding. This used to be exclusively meant for venture capitalist and deep pocketed angel investors, but blockchain and decentralization has quickly marked these people as the first people to be on their Death Note - the profits to be made there are TOO high, and its a no-brainer for blockchain to disrupt that market.

A very big point to note. Very very big. And this is important, so listen up. Investing in startups is risky. Period. With or without cryptocurrencies. The risk profile of a startup company is still very big either way, though I admit that there are pros and cons to each method that helps reduces risk in certain areas.

But the point is that even before cryptocurrency was a word, both the RISKS and REWARDS in startup funding are beyond comprehension for normal people.

So this "ICO bubble" that we are seeing here, to me it is just what happens if you allow the general public to take part in such high risk investments. Deals that would have previously be made behind the scenes (and probably with unfavourable terms to the startup) and now out in the open for anyone to fund.

Sure, the quality of the projects are dropping, the quantity of projects are increasing and the amount that they are asking for are increasing too. Who is to blame them? The market is signalling their intentions to be involved in more risky ventures.

Now that pandora's box has been opened, why would a startup choose to take VC money that has strings attached, when they can take the general public's money and retain much more control?

I think this is a good thing. People CAN invest in ICOs if they want to, but they should be willing to assume all the risks (and rewards) associated with such an investment.

Personally, the thing I'm peeved most about is regulations. Anyone that steps foot into the crypto space immediately denounces any form of recourse - there is none in the crypto world. It should go immediately without saying that touching an ICO is like the biggest risk you can take, and no amount of government regulations can save your ass if you made bad decisions.

Long story short - while ICOs might seem like digital IPOs, I think they are much riskier due to (1) the complicated and non-standard process of investing in it and (2) the much earlier start point of business development, which invariably leads to a much higher fail rate. Of course, that also means that the returns can be phenomenal.