How much commissions do insurance agents earn?

Everyone's talking about how a former AXA Life Insurance agent, RameshKrishnan, has been awarded $4 million in damages. High Court Judicial Commissioner George awarded this based on the establishment package offered by Prudential:
In other words, we can look at this as a $4 million annual paycheck that was given out.

Many had a lot to say about the absurdly high pay. 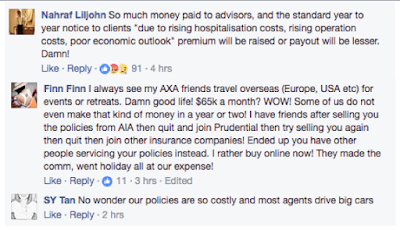 The key question I had after reading the news article was:

Was the agents’ focus on regular premium policies self-motivated?

The persistency ratio for single premium policies tends to be more volatile as policyholders will typically cash out these policies to realise the profit when market conditions are favourable. Ramesh asserts that the CEO then, Mr Gilbert Pak, had assured him in February 2010 that they was agreeable to taking into account only the persistency ratio in respect of regular premium policies when assessing the eligibility of Ramesh Organisation advisers for incentives and awards in the event that their persistency ratio in respect of single premium products dropped as a result of the organisation’s shift in focus. On this assurance, the Ramesh Organisation had focused on regular premium products."       Source

Doesn’t this sound like the agents’ motivation to sell regular premium policies were not purely based on their customers’ needs anymore, but also because they wanted to increase their persistency ratio? It sounded like this to me leh?

(The persistency ratio is a key assessment criteria of an agent’s performance in running for the bonus awards and incentives given to top performers.)
Letter from AXA’s CEO Glenn Williams
High Number of Lapsed / Surrendered Policies

"Based on our observations of notable trends [on] the lapsing and surrendering of policies, we have strong reason to believe that the ex-advisers in [the] Ramesh Organisation have been involved in [the] twisting of clients’ policies. We are very concerned as to whether the clients have been provided with proper advice or [whether] any improper switching/replacement practices [have been] carried out by the ex-advisers which are detrimental to [the] clients’ interests."

(“Twisting” is a term used to describe the situation where a policyholder is persuaded to allow an existing policy to lapse, only to enter into a new policy on similar terms.)
"Twisting" hurts the consumer but is a sweet deal for the agent who stands to earn the commissions all over again. However, it is unclear from the judgment if any evidence was found thereafter to support AXA's claim that the agent had indeed practised "twisting", and probably only the agents themselves will have the answer.
The next question we're all wondering is, how much do financial advisors stand to earn from selling us insurance?

Coupled with the ongoing debate over term and life insurance, many financial bloggers advocate Buy Term and Invest the Rest (BTIR), whereas insurance agents cry out that you should be getting Whole Life (WL) Insurance instead. Recently, there was even a rather contentious article put out (by an insurance agent, unsurprisingly) to argue in favour of whole life policies.

Who's right and who's wrong? That's a topic for another day, but in the meantime, you can read my previous posts on this debate here and here. One common argument raised by BTIR advocates is that insurance agents are pushing for WL because it lines their pockets with hefty commissions.
Is that true? How much does your insurance agent stand to gain if he sells you a whole life policy instead of term insurance?

Someone managed to get a copy of the Agency Schedule of Commissions from one of the major insurance companies in Singapore, which I've reproduced below and will be using for the purpose of this article.

As you can see from the commission table above, whole life insurance, endowment and investment-linked policies (ILPs) have the highest commission rates.

Read why I cancelled my ILP here.

Let's look at two insurance agents - one who advocates BTIR, and another who promotes WL.
Selling Whole Life Insurance

Woohoo! You've just closed a whole life policy with an annual premium of $4000 (I'm using the quote I recently got from my agent for 500k TPD if you were wondering).

That doesn't sound too difficult, does it? You technically just need to find at least 2 customers every month to hit your quota. Even my 9-6pm job didn't pay me this much income!

On the other hand, let's compare to the other agent who closes a term policy with average annualised premiums of $400 instead. Let's call him Jack.

Unlike you, Jack needs to find 250 consumers to buy term insurance from him if he wants to match up to your $50k annual income. Assuming he goes for vacation in June and December with his kids, that means he needs to close 25 customers every month, or almost 1 sale a day!

Let's not forget that insurance companies also offer a lot of other perks to their agents, including bonuses and long-term incentives that can significantly boost your income too.

How do I know? Well, I married an ex-insurance agent who was pretty terrible at his job (because he mostly sold term, health and travel insurance - stuff which I agree with). He didn't push ILPs or endowment plans, and that's why I told him to quit his job and switch careers (I'm not kidding).

Still not enough proof for you? Check out this Million Dollar Round Table (MDRT) Prudential insurance selling you the same dream career in this manner. You can earn $100,000 in a year!

From the table, you can also see that accident plans have a flat rate of up to 30% which is payable throughout the entire premium-paying term. This means that you're not just limited to 6 years worth of accident plans, but much longer!

The smart insurance agent could also then start your relationship and gain your trust by selling you a cheap personal accident plan, and then slowly upgrade you to other plans later on.

So how much commissions does your insurance agent earn from selling you that policy?

Also read: Questions to ask your insurance agent (including how much they stand to gain from you)

For the record, my policies are handled by my 3 agents who focus on selling me the plans I need instead of pushing me to stuff like ILPs or WL. Maybe because they know they're dealing with Budget Babe, LOL. I'm not saying agents who promote such products are bad, but they definitely aren't my cup of tea. At the end of the day, insurance is a complex product and there are no right or wrong answers. I cannot emphasize enough on having a trusted advisor who will be focused on selling you the right policies that fit your needs vs. the ones that line their pockets. Best of luck finding a good advisor!