Based on Chart 1 below, Hatten’s chart seems to have several positives.

d) ADX has been rising amid positively placed directional indicators, signifying the presence of a trend. 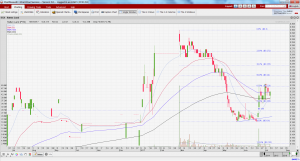 Some technical experts also have a positive view on Hatten

This write-up revolves around Hatten’s chart as its chart has caught my attention. It is important to assess the share price performance in the next couple of days as 11 Jul and 12 Jul are T+6 and T+7 of the surge seen on 3 Jul 2017. A sustained breakout at $0.230 with volume points to an eventual measured technical target price of around $0.250. A sustained breakdown below $0.205 with volume negates the bullish tinge in the chart.

For fundamental research, readers should refer to the various research reports on Hatten. FYI, analysts’ target prices range from $0.380 – 0.440.

P.S: I am vested in Hatten.