Is the stock market picking up? In just two weeks, we've seen 3 IPOs on SGX - usually a sign of a bullish market sentiment.

And while I prefer to sell during such times, I don't usually rule out spending on IPOs especially if their valuations are cheap or decent enough for me.

Unfortunately I wasn't allocated any shares of Sanli Group last week when the results were announced (sorry for not blogging about them - I literally finished my analysis 12 hours before the IPO application deadline and didn't have enough time to churn out a blog post!). So I'm starting earlier on World Class Global and HRnetGroup this time. 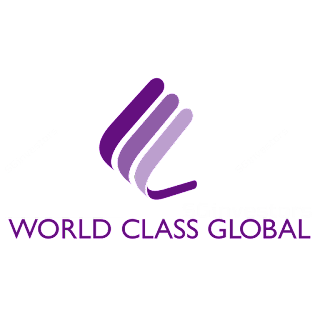 Business:
WCG is a real estate company newly incorporated in 2013 with little history on its books. It is being spun out from its parent group - jeweller Aspial Corporation. (Remember my piece dissecting Aspial's bonds previously?)

WCG's business is in property development and investment in Australia and Malaysia. It has launched 3 projects in Australia, including 2 residential towers whose sales revenue currently stands at AUD $1.22 billion. It also owns 28 properties (mostly shophouses) in Penang, which it intends to develop further from here. 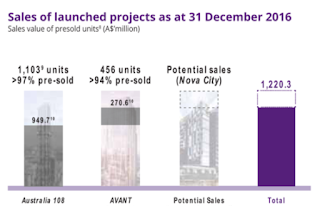 1. A cursory look at WCG's financial statements shows that for the past 3 years, it has been making losses, but that is largely due to the fact that Australia's accounting laws do not allow for progressive recognition of project revenue. (eg. If they've developed 70% of a 100m project, then it ought to show up as 70m of revenue, but it doesn't.) Their projects are due for completion and handover in 2018 - 2020, which is when revenue will finally be registered on its books.

2. The NAV per share is 11.4 Singapore cents (post-IPO), which means the IPO offered price is more than 2x P/B. Even its property peers UOL and Frasers are not valued at such a high multiple.

4. Dividends are not guaranteed. While WCG plans to declare an annual dividend of up to 50% of its net profit as dividends, there is in fact no formal dividend policy guaranteeing shareholders any regular payout.

Conclusion
There is a chance that when profits are finally recognised from its Australia project completion, its share price might jump, but I'd give it a miss for now and would rather look at other cheaper property developers instead if I had to choose. I'm not too positive that the share price will fly post-IPO either. 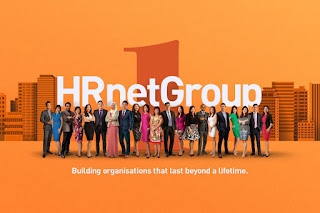 Business:
Founded in 1992, HRnetGroup has grown to become the largest recruitment player by revenue in Singapore with a market share of 20%. Today, they have over 1000 consultants in 10 Asian cities with 11 brands that surely most of you would have heard of as well - RecruitExpress, PeopleSearch, SearchAsia, etc. 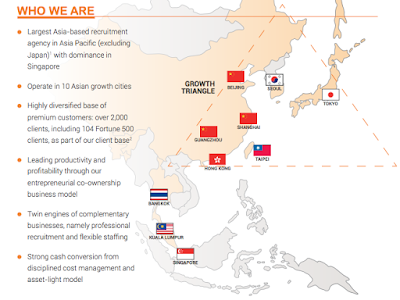 Their business of recruitment and flexible staffing is not difficult to understand - they find suitable candidates for their clients' available job positions. With the IPO funds, they intend to expand and grow their capabilities in North Asia, where they're already present in the local markets.

1. Extremely compelling financials: net cash position with high profit margins.
HRnetGroup currently has zero debt and $106 million in cash. The group has made profits every year except in 1998, with revenue rising over the years. Their profit margins are also much higher than most of their peers. 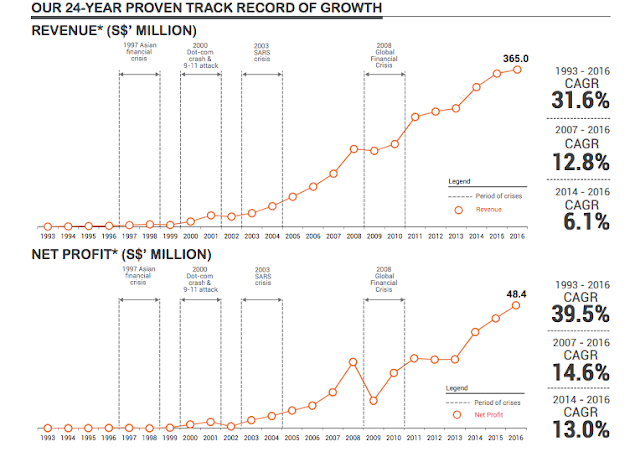 2. Strong market player.
The recruitment business is a cut-throat industry with many players and low barriers to entry (anyone can set up a recruitment agency within a few hours). Yet, the fact that HRnetGroup is still going strong after more than 2 decades is testament to its success and track record.
In terms of revenue, they are the largest recruitment agency in APAC (ex-Japan) as compared to their peers. While Singapore is the country with the highest margins for them, their success in North Asia has been none too shabby either. 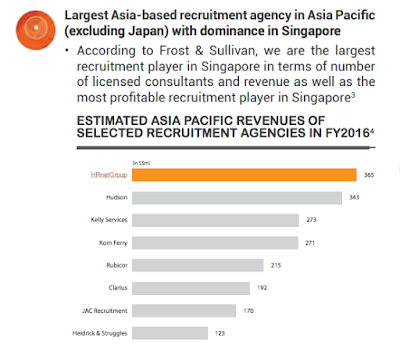 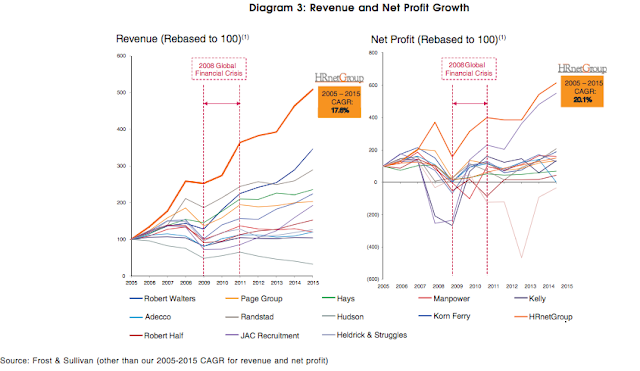 3. Growth has been organic.
Companies typically grow in 2 ways - organically, or through debt / acquisitions.

HRnetGroup has funded its operations and growth through cash generated by their business without relying on any debt borrowings. This is quite an impressive feat, especially if you consider how they started in Singapore and has since grown to over 10 countries. The beginnings of their success story in North Asia also seems quite promising thus far, with the region contributing for almost 40% of their gross profit last year. 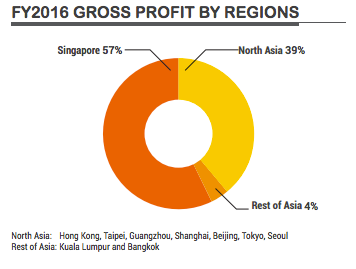 4. Strong customer loyalty.
HRnetGroup claims that they have 104 out of the Fortune 500 companies as their clients, including Samsung Asia which has been their client since 1999!

Their top five customers have also been with them for over 15 years or more, and that surely is a sign that this is one company that has been able to prove itself as a notch above its competitors time and time again. There is very little switching costs involved for a company to change recruitment vendors so this remarkable track record of customer loyalty really took me by surprise.

Other clients include Bundwealth, Olympus, Acer and other top names in the banking and telecommunications sector. Yet, HRnetGroup does not have the problem of key customer risk, as even their top 10 customers combined only contribute 20% of their total revenue. They claim to have over 2000 clients so it doesn't seem like they have much problem courting new customers at all. 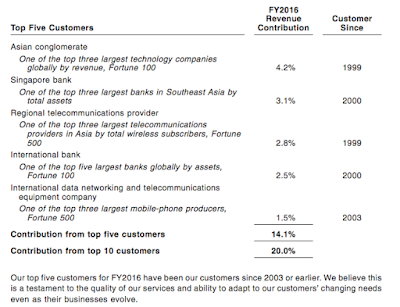 While some recruitment agencies carve out a niche for themselves in specific sectors in order to differentiate themselves from the competition, HRnetGroup doesn't seem to have adopted this strategy at all but is still doing better than the rest! This also ensures that they are not overly-reliant on a single sector, so any industry-specific recessions should not have a significant impact on their operations at all. 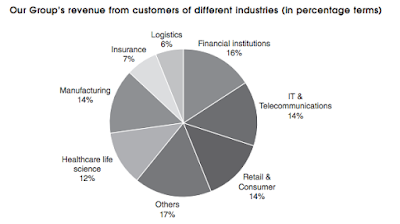 1. Why is management paying themselves so much?
One of their key executive officers, Lorencz Tay, was paid over $1 million every year for the last 2 years. The total payout to the group's directors and executive officers are also quite astounding, and this is the key reason that makes me uncomfortable about applying. 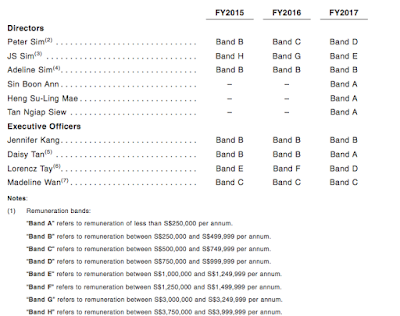 Existing shareholders (directors and employees) benefit the most from this listing, with almost 50% increase in NAV per share whereas new investors will see theirs being diluted by 70%.


3. The company's key assets are in its human capital.
HRnetGroup does not own any properties; its value lies in its employees and their productivity. Thus far, the results have been stellar, but it remains to be seen if they can retain their employees in the years to come.

The founder claims that their co-ownership business model - where employees hold shares and are entitled to group profits instead of being focused on sales commissions - is the secret to their success and also a core reason for employees to stick with them.

But again, it doesn't take much for a star employee to simply leave and start up his own competition.


4. No formal dividend policy.
Management is proposing to distribute 50% of net earnings for FY17 and FY18 to shareholders, but there is no guarantee that dividends will continue to be paid out after that.


Conclusion
I still have 2 days to decide and have yet to make up my mind as to whether I want to participate in this IPO round. While WCG was a simple "no" for me, there are many compelling reasons to buy into HRnetGroup although the rich valuations and high management salaries are putting me off.

This is clearly NOT a value buy and we should be treating it more like a growth stock instead. The question is, do you buy into HRnetGroup's growth story?