The Group is also engaged in the production and sale of premium quality marble blocks and slabs, aggregates and calcium carbonate powder from its quarry in Kelantan, Malaysia.

The most attractive aspect of Capital World is its innovative business model. In Malaysia, there are numerous landowners who have sizeable plots of land (perhaps due to inheritance). Such plots of land are typically in mature estates where the landowners do not know how to best maximise the returns on the land. Capital World fills this niche by working with the landowners on a joint venture basis to create value added property developments.

With reference to Figure 1 below, for a land entitlement of RM100m, there are several pertinent points.

c) It is noteworthy that Capital World will pay the land owner up to a cap of RM100m. i.e. it does not need to share the profits of the developments with the land owner.

d) Capital World typically targets land in mature estates where there is a sizeable catchment area which is ready for construction.

e) High margins for such business model as there are little or less interest costs. (See Figure 4) 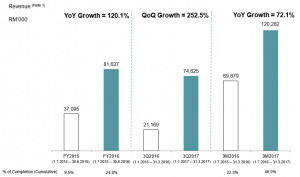 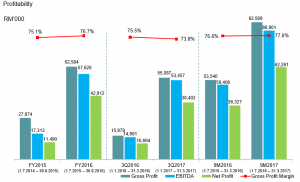 During the results briefing on last Monday, I saw analysts from various houses such as CIMB, Daiwa, Jefferies, Lim & Tan and NRA etc. As of now, there are only unrated reports from Daiwa and Lim & Tan. If Capital World continues to deliver, it is likely to attract analysts’ attention.

Project Austin and Project Sitiawan in the pipeline

Besides focusing on delivery of Capital City, Capital World targets to launch Project Austin at the end of the year, or early 2018 subject to government approvals. It also has another Project Sitiawan Wellness Hub to be launched in the medium term. Given their current project pipeline, they seem to have enough business on hand even if it does not get any new projects in the next one year.

Based on Chart 1 below, the recent incessant selling has already pushed Capital World to trade at prices lower than the price when it first proposed the RTO on 9 Jun 2016 (price was S$0.204 on 9 Jun 2016). Price seems entrenched in a strong downtrend. However, there seems to be a bullish harami formation on 31 May 2017, coupled with a (bullish) gravestone doji formation on 1 June 2017. In addition, indicators such as RSI and MACD are oversold and exhibit bullish divergences. ADX is at an unsustainable level 50.9.

Given the current chart development, it is likely that Capital World should have limited near term downside with good supports at $0.120 – 0.130. However, it is noteworthy that a) we require a strong bullish candle or a gap in the next few days to confirm that selling has ended for the near term; b) The price continues to be entrenched in a medium-term downtrend until it makes a sustained close above $0.192. 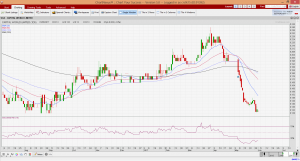 Management will focus on realising synergies between marble and property business

Excluding the RTO expenses, Capital World’s marble business (i.e. Terratech) is still losing around S$4.2m for FY17 (FY16 lost S$3.6m). Management is aware and definitely plans to reduce the losses from the marble business. It is the midst of doing an in-depth review of Terratech’s business to see how best to derive synergies. However, as the RTO was only completed on 4 May 2017, it is natural that management needs some time to resolve this.

RTO expenses unlikely to be huge

As Capital World continues to deliver and complete its Capital City project, it is likely that its results should be positive in the next few quarters. Based on an annualised FY17 earnings on Capital City (RM62.3m / 3 quarters x 4 quarters / SGDRM 3.1) and coupled with an estimated loss of S$6.8m core numbers (i.e. excluding non-recurring expenses, just a number plucked from the sky but it seems conservative), Capital World trades at an undemanding 8.2x FY17F PE as compared to the average FY17F PE of 20x for Malaysia developers.
P.S: As with all investments (most investments carry at least some degree of risk), readers should carefully evaluate each investment decision with care. I wish to emphasise that as I am not an analyst, the above annualised PE is just a simple back of the envelope calculation which may not be accurate. This is merely an introduction of Capital World. Readers should refer to SGX for more information and the unrated analyst reports from Daiwa and Lim & Tan.