Thoughts on Bitcoin, Cryptocurrencies and the future of Finance

Hey guys, this is just a blog post of me taking a massive brain dump and just dropping whatever is in my head onto this page here. Ever since my recent post on Bitcoin hitting $2500 (subsequently went on to almost hit $2800 and it is now $2000), I've once again (I've done it before in the past, on 2 separate occasions) plunged back into cryptocurrencies to see what is going on at this front.

I'm afraid that this post is going to be full of technical jargon. Unfortunately, there is no easy way around this. If I explained all the jargon that will pop up, this is going to be a super long post. I'm sure 50% of readers know close to nothing about Bitcoin, 90% cannot name more than 5 crytocurrencies and 99% probably don't understand the mechanics behind it. So how can we proceed? I just talk and no one understands?

If you don't feel confident about cryptocurrencies, I strongly recommend that you watch this series of youtube videos. It was created by the DASH community (a cryptocurrency which actually allows real world spending through a top-up debit card), but the first 4 videos are relevant to all most cryptocurrencies (maybe I can explain why later).
The general public (99%) have the view that digital currencies are just like "digital funny money", that it doesn't have any value and it doesn't have any real world applications.

What are the things that you could buy with digital currencies then? Well, excluding the dark web (drugs, weapons, assassination contracts, etc), most of the things on the clear web were like VPNs and gold bars. Very tin-foil hatty, if I may say so myself.

Digital currency debit cards allow people to buy real goods and services without all the hassle of the other party not only knowing, but willing to accept their digital currency and also knowing how to receive it. I'm sure these services aren't cheap, but it's a great way to show that they can actually be used for buying things in the real world. If there was more adoption and direct payments without the fiat intermediary, things would take off a lot faster.

Other than those cards, many big companies have also started to accept bitcoins as payment online. They are making good headway through gift cards as well. Many small retail stores also accept direct payment at their physical locations.

However, this is where a problem occurs, especially for Bitcoin. Since blockchain requires several blocks to confirm a transaction, direct Bitcoin transactions can take a while to be confirmed into consensus. Basically, what is means is that you can spend your BTC at shop A, then you can go to shop B and spend the BTC that you already spent at shop A. And you can keep doing this as long as the merchant is willing to give you the benefit of doubt and trust you that you transaction will EVENTUALLY get through. Of course, it won't in such a situation.

In a layman's term, it's like walking into a shop, purchasing a product, but paying with an envelope that supposedly has the money for the purchase.... but the shop owner can only open up the envelope and check X number of minutes later. The usual waiting time was under 20 mins. The current 7-day average of the tx confirmation time (meaning that there are transactions much slower than this) is 4 hours.

This issue of the tx speed issue and is one of the main reasons why BTC cannot be adopted as a point of sales method. There is no discussion to fix this, but this is a huge problem for BTC being viable for day to day transactions. People can't be waiting around even for 5 minutes every time they buy something.

The distribution of power in BTC is also a cause of concern. Since it is a proof of work (POW) model, the power is held with the miners. Since mining is expensive, there is a shift towards centralization and pools of power, rather than it being more spread out.

I personally prefer the proof of stake (POS) model, or even the POI model by NEM. That means that the power isn't handed over by default to people with expensive hardware. The power is instead with the stakeholders, people who actually own the digital currency and are motivated for it to do well since they have a share. The POS model solves the issue of huge miners with no initial stake pushing their weight around.

Of course, the elephant is the room is the pseudo-anonymous nature of bitcoin. Since all coins are on the blockchain and everyone can watch where everything is going, coins can be followed around and that creates a privacy issue, especially with banks and government controlling the entry and exits by matching addresses to people / businesses when they cash out.

Let's say a business is robbed and the robbers used the stolen cash to pay for goods. The money changes hands a couple of times, then it's your change after you bought some stuff. Yes, the stolen "cash" is with you now, but obviously you would not be faulted over it. The BTC blockchain is different, and it can be traced. So, how far back must a transaction be for you to not be held accountable? There is no answer to this.

This essentially is a fungibility problem. With cash, my $2 note and your $2 is the same. With BTC, it is a problem. Stolen coins or coins used for black market transactions can be followed around, except if it is thrown into a tumbler (virtual money laundering) and is obfuscated.

Many people actually see this as a problem as well, which are why the newer coin technologies have implemented ways to tackle this problem. Some solve it quite well (DASH with private payment), while others are implementing complete solutions (the zerocoin protocol).

However, this creates a new problem. The problem that governments AND businesses will not adopt or support a coin technology which is based on privacy, since they would not be able to check on transactions. This of course opens the pandora's box for tax evasion, money laundering... just generally bad stuff.

The counter-arguement would be that criminals wouldn't use a transparent standard that gets adopted anyway. Right now with BTC tumblers, it is still cheap and easy for anyone to hide what is going on with their money trail. With the first mover advantage, name recognition and a huge community to support it, BTC can still act as "digital gold". And just like how you don't see people paying for things at shops with gold coins or bars, it would be hard for BTC to be used in such a way as well. BTC seems to me more like a store, but then again there are newer technologies that could win over supporters.

Now that we're done talking about BTC, let's talk about the reasons for digital currencies and why it might be adopted.

For some of the coins with a very fast transaction confirmation (less than 1 min, some as fast as a few seconds), they are actually viable to be used as a point of sales method. Why would anyone want to do that?

If you get paid instantly and you see that money in your bank account, you've removed your settlement risk and can happily and confidently release your goods, knowing that you've been paid.

And since the money goes straight to your wallet, and not your bank or any other 3rd party, you don't need to have "trust 3rd parties" who basically add a middle man in between your initially direct transaction.

Digital currencies that can transact quickly immediately removes both counterparty and settlement risk. And the removal of risk also reduces costs that were previously associated with managing those risks.

Sending the digital equivalent of TTs would be almost instantaneous (instead of several days) with a cost more like 0.01% (instead of the industry standard of 1/8% + FX fees).

So that's for businesses. How about people?

I think for people, the cost becomes less of an issue, while the convenience, privacy and trust of the network becomes more important. Why? Think of the last time YOU transferred money to another PERSON. Now think of all the times that you transact with businesses. You've probably transferred money to people a couple of times the last month, while in a given day you could already have made several transactions by the afternoon!

Right now, I think the simplification of coin technology to laymen have advanced a lot. Some simple intro to block chain, followed by the important understanding of public + private keys and you're good to go. Certain currencies are trying to make it even easier for people by associating those long address strings with something like usernames, which helps for sure. I hope I can snag a good name if that really happens!

Privacy and trust is an issue too. If anyone had a choice, most people would say that they would prefer that NO ONE knew what they were buying or up to lately, especially businesses (customers can be subject to price discrimination) and governments. While many people believe that any currency that is private will fail due to the lack of support from businesses and governments, I actually think that it could be a winning point, especially if your government is failing ie. doing a really bad job in developing the country, the economy, stable exchange rate. In such a situation, you SHOULD be able to try and preserve your wealth by moving it somewhere else, and the government shouldn't be able to stop you. If there is yet another banking crisis in the near future (which I'm quite certain there would be one), the faith in the banks and of the currency of their country will be shattered by many.

I might even go so far as to say that a collapse in areas of the modern banking and finance system would encourage adoption of digital currencies.

Of course, that is very unlikely. In fact, I would say that it would be nigh impossible. If anything, a financial crisis would weaken the unquestioned faith of fiat currencies, the misplaced trust in banks, governments and offer people a parrellel and alternative way to do things that they already do (save, spend) with digital currencies.

So, don't get me wrong. I don't think that the world is going to digital currencies. But I see it that it is going to really pose a very serious and proper alternative to the traditional way of "it's always been done like that" thinking.

Anyway, to end off my thoughts for now, I do still think that the recent coin mania was a bubble, but I can totally see how it becomes even more and more bubbly. That said, while you could make 10X your money over a few months, you could just as easily lose 30% in 24h. 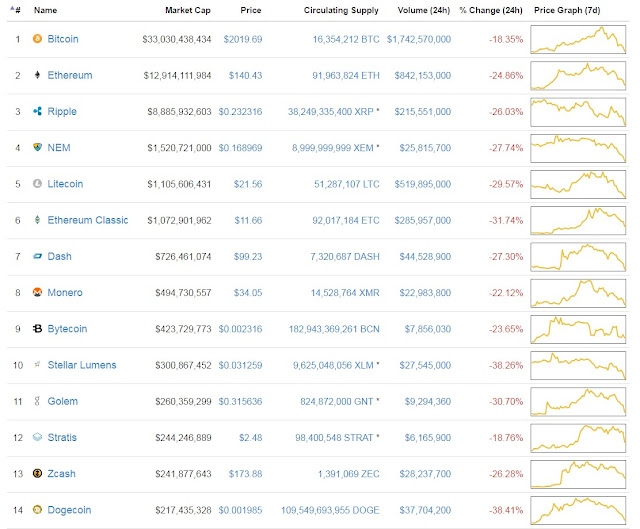 Why do I think it's a bubble with even more potential? There plenty of 15-25 year olds with YouTube channels going on about crytocurrencies almost as if they were fund managers. Some are rather bright though, and their massive profits speak for themselves, but its just food for thought to know how many young people have already gotten into digital currencies. Here's a video of one of the guys that I stumbled upon.
Of course I'm biased because he has precious metals, and thinks that bonds, stocks and real estate are overvalued. What's wrong with my echo bubble? Go back to your stock / property bubble and yell at me from there! (Haha, just some humour)