I was asked by InvestingNote if they could do a guest post on QAF. I always appreciate the effort put into well researched pieces, so why not?

The article below comes from Calvin Wee, whom I’m told, is a new hire at InvestingNote. I guess we’d see more such articles from him soon. 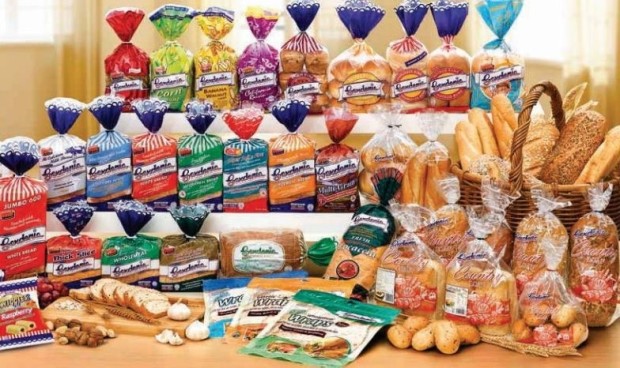 April 5, QAF’s annual report of financial year 2016, refer to the report at: http://www.qaf.com.sg/media/SGXAnnual%20Re…

January 10, ‘QAF to invest S$21.5m to expand in the Philippines, refer to the news at
http://www.businesstimes.com.sg/companies-…

Overall, QAF has shown resilience in the financial year of 2016, amidst a challenging economic environment. ROE remains at a healthy 13% and PBT excluding exceptional items increased by 4%. Moreover, QAF maintained a healthy balance sheet and continued to pay steady dividends to its shareholders. It is interesting to note that QAF have plans to penetrate the halal food market by establishing new production plants in Malaysia that will export packaged bread to Islamic countries in Asia. Also, the factory currently undergoing construction in Malaysia will eventually replace the factory in Singapore when the latter lease expires and this will drive production costs down significantly. The stock price of QAF is currently on a downtrend. 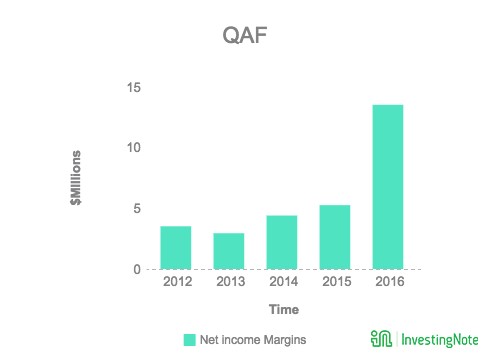 QAF’s revenue fell by 11% yoy, partially due to the deconsolidation of its Malaysia-based subsidiary, GBKL (Gardenia Bakeries (KL) Sdn Bhd), resulting in a fall in royalty fees collected. After adjusting for that one-off event, QAF saw top line growth with higher EBIT across all its business segments. Excluding the profits gained from the deconsolidation of GBKL, QAF’s diluted EPS in 2016 would still have increased by 16% from 2015 and a substantial increase in net income margins from $5.3 million to $13.5 million.

QAF reported a slight increase in assets despite the deconsolidation of GBKL as it entered into a joint venture for its Malaysian operations. QAF’s net cash flows decreased to -$4.149 millon despite an increase in operating cash flows by $15.067 million due to a large decrease in financing cash flow to -$39.884 million. Correspondingly, they reported lower cash and cash equivalent in the balance sheet.

Segment performance
Traditionally, the bakery segment provides the lion share of the revenue. However, after the deconsolidation of GBKL, revenue from the primary production segment has overtaken the bakery segment for the first time in 2016. QAF’s revenue was derived mainly from Australia, accounting for close to half of the total revenue, while its operations in Singapore and Philippines contributed similar but smaller amounts. Due to the deconsolidation of GBKL, the contributions from its Malaysia operations dropped sharply. 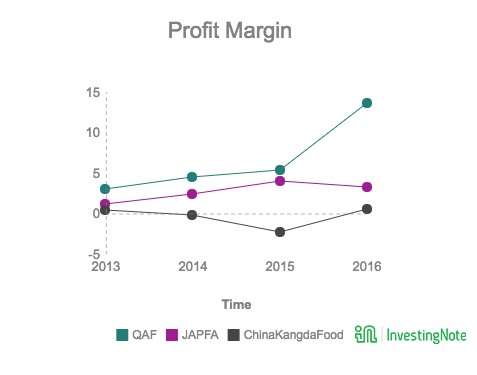 Across all the financial years since 2013, QAF has recorded higher profit margins than its competitors. From the chart, we can see that ChinaKangdaFood experienced negative profit margins in 2015, which is a potential red flag for investors. Also, Japfa experienced a dip in its profit margin in 2016, which may signal an erosion in their competitive advantage.

In conclusion, QAF has developed strong economic moats as the market leader of the bakery segment in Singapore, Malaysia and Philippines in the past decades. Moreover, QAF controls Rivela, the largest fully integrated pork production company in Australia. Although the deconsolidation of GBKL resulted in a fall in revenue, this is expected to be temporary if its expansion into the halal food market succeed. QAF has proven itself to be a reliable defensive stock in today’s volatile market. QAF is fully cognizant of the challenges such as an increase in competition and has come up with a ‘strategy of sustainable growth and value creation’. All in all, if QAF manages to execute its strategy, it will continue to dominate its business segments and deliver sustained growth and dividends to shareholders.

This article is written by @calvinwee from InvestingNote.