6 concerns investors have with Midas (7 Apr 17)

Key takeaways from my concerns posed to the management

Concern 1: Orders momentum have slowed for its aluminium extrusion segment

According to management, they remain positive for their aluminium extrusion segment. The main reason why they have not announced new contracts recently is because their customers are giving some of their orders in the form of purchase orders. Such orders are smaller in quantum and need to be delivered in a shorter period of time. For example, previously, contracts can be around RMB100m per contract size. However, nowadays, this RMB100m may be split into 3 or 4 purchase orders in different time periods. It does not affect Midas, as it still gets RMB100m in the end. However, it is difficult for them to announce such contracts as the purchase orders are smaller in sizes. To consolidate the orders together and announce is not representative due to the shorter delivery time. Some contracts may have already been delivered by the time they announce.

In addition, management elaborated that besides doing just the aluminium profiles, they are doing more of the downstream fabrication of passenger train car body components or modules. In fact, they are one of the first and amongst the few in the PRC aluminium alloy extrusion industry to possess such capabilities. Fabrication is well received by its customers both locally and overseas as it reduces product risk, inventory and logistic costs from their customers’ perspective.

Concern 2: Orders momentum for its 32.5% owned NPRT may have slowed

It has been three months since the last contract was announced by NPRT. However, management believes that order momentum continues to be good as NPRT is one of the only four licenced metro train assembly companies in China. As of 31 Dec 2016, NPRT has an order book of RMB14b. Going forward, NPRT is likely to be a steady contributor to Midas’ results.

Concern 3: Aluminium alloy plates and sheets division may be delayed

As this aluminium alloy plates and sheets division has been previously delayed before, some clients are concerned that it may be delayed again. However, management believes that this segment is on track to commence commercial production in 2Q, as originally indicated in my earlier write-up (click HERE). The main reason for the previous delay was that management wants to be sure all the processes in this segment are running smoothly before they commence production. Management mentioned that they have already lined up customers for this segment, thus it is likely to be a matter of time before this segment makes a positive contribution to Midas.

Management shared that after considering all the aspects from the various stakeholders, they believe it is to the best interests of the company and its shareholders not to declare a dividend in 2016. This is because they recently completed the acquisition of Huicheng with the issuance of approximately 462m shares in July 2016, being the initial consideration for the acquisition. If Midas were to issue dividends, then Huicheng’s owners who received 462m shares would naturally be entitled to a share of Midas’ full year earnings. However, this would not be fair to other shareholders as Huicheng only contributed about five months of profits to Midas.

As I have previously pointed out in my technical write-up on Midas (click HERE), there seems to be heavy selling pressure with heavy sell queues. Such seemingly strong selling pressure may indicate that there may be some concerns, or bad news on Midas known to the market but unknown to me.

However, based on Chart 1 below, Midas seems to be in an accumulation phase. Although Midas is still on a long-term downtrend, its chart seems generally positive and is in the midst of a multi month base formation. Indicators are strengthening. For example, OBV is at a three-year high which signifies accumulation. MACD and RSI are showing bullish divergences and strengthening. A sustained breach above the strong resistance of $0.240 – 0.260 with volume expansion will be very positive with an eventual technical measured target of around $0.300. A sustained break below $0.220 with volume expansion is bearish for the chart.

Chart 1: Midas seems to be in an accumulation phase 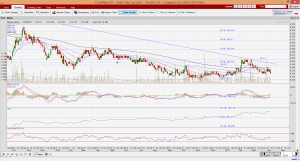 Concern 6: EPS may not grow y/y due to issuance of shares for Huicheng acquisition

The acquisition of Huicheng involves two tranches of share issuance, namely 462m shares in July 2016, being the initial consideration and approximately 220m shares as the earned-out consideration. Huicheng’s FY16 net profit inclusive non-core income, such as government grants, dividend income etc. has exceeded RMB80m. However, for the interests of shareholders, management has put in a clause in their acquisition of Huicheng to calculate the earned-out target based on adjusted profit after tax less non-core income. Therefore, approximately 220m shares will be issued out as the earned-out consideration, instead of 271m shares.

We have to see the upcoming quarterly results to evaluate whether Midas’ EPS can grow y/y with the issuance of shares. However, I believe Midas management have already carefully evaluated the pros and cons and they believe it is to the best interest of the company to acquire Huicheng via share issuance. (See the rationale of Huicheng acquistion HERE)

The above concerns can be right, or wrong. Only time will tell. As Mr Benjamin Graham once said, “In the short run, the market is a voting machine but in the long run, it is a weighing machine.” Furthermore, when a stock price falls, the market will focus more on the potential negative aspects of a company or its industry and vice versa. In a nutshell, it boils down to whether one believes the management, the business and its industry.

P.S: I am vested. Do note that as I am a full time remisier, I can increase / reduce my positions / holdings fast to capitalize on the markets’ movements. Furthermore, I wish to emphasise that I have a high risk appetite. Please refer to the disclaimer below.