Based on Chart 1 below, although 50D, 100D and 200D EMAs are still rising, 20D EMA is turning downwards. i.e. although S&P500 medium to long term outlook is still up, the near-term outlook seems bearish. ADX closed at 28, amid negatively placed DIs. This is because there seems to be a potential minor double top formation with the neckline at around 2,353 where the S&P500 has difficulty closing above this level for the past three days. A sustained break below 2,353 points to an eventual measured technical target of around 2,320. 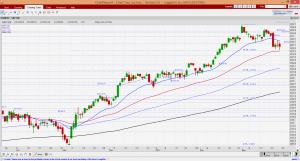 Based on Chart 2 below, 20D EMA has reversed its minor decline and moved higher, together with the other EMAs. There is a good degree of separation between the various EMAs, which may be indicative of good support for the uptrend. OBV continues to be bullish and closes at a high, last seen on May 2015. RSI closes at around 62 which is not overbought yet. It is noteworthy that both MACD and RSI exhibit bearish divergence but as previously mentioned, bearish divergences can exist for some time and they are not “outright sell signals” by themselves. Hang Seng’s chart continues to be bullish. Only a break below 23,450 with volume expansion and on a sustained basis will negate the “bullish feel” and be bearish for the chart. 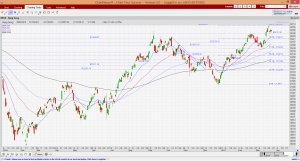 Based on my write-up on 10 Mar 2017, “STI’s chart continues to be on an uptrend, evidenced by the rising EMAs. Similar to S&P500, STI has not traded below its 20D EMA since 4 Jan 2017. However, indicators such as MACD, MFI, OBV and RSI are exhibiting bearish divergences. A sustained break below the rising 20D EMA (currently at 3,110) will be a tad bearish for the chart. Conversely, a sustained break above 3,161 is bullish for the chart.”

–> STI only managed to close above 3,161 for 3 consecutive trading days before profit taking set in. However, STI also only closed below its 20D EMA consecutively for two days before it closed higher at 3,143 on 24 Mar 2017.

Based on Chart 3 below, STI continues to be on an uptrend, as evidenced by its EMAs. 20D EMA seems to be flattening but we should give it another week to observe. Amid negatively placed DIs, ADX has started to decline from 31 on 10 Mar 2017 to around 24 on 24 Mar 2017. Some indicators show mixed signals. For example, MACD and RSI continue to weaken but OBV is still on an uptrend. My personal view is that STI’s near term outlook is likely to be choppy. A sustained break below 20D EMA (currently around 3,132) is near term negative, whereas a sustained break above 3,161 is positive for the chart.

Chart 3: A sustained break below 20D EMA is near term negative 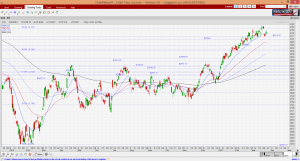 As per my write-up on 10 Mar 2017 (see HERE), I mentioned that I am aware of the factors which may signal caution on the market. However, I have informed my clients last week that I have raised my percentage invested from 129% on 10 Mar 2017 to 161% on 24 Mar 2017 (with the help of CFDs). I have increased my positions into certain stocks which I feel are laggards with good business fundamentals or / and potential near term catalysts. (My clients have, will & are informed on new stocks which I have entered and upon any significant portfolio change.)

Readers who wish to be notified of my write-ups and / or informative emails, can consider signing up at http://ernest15percent.com. However, this reader’s mailing list has a one or two-day lag time as I will (naturally) send information (more information, more emails with more details) to my clients first. For readers who wish to enquire on being my client, they can consider leaving their contacts here http://ernest15percent.com/index.php/about-me/

P.S: Do note that as I am a full time remisier, I can change my percentage invested fast to capitalize on the markets’ movements. Furthermore, I wish to emphasise that I have a high risk appetite.

1. Some clients who have been with me for years would know that I have been working on an average 6 out of 7 days per week, for almost 7 years. Going forward, I am likely to publish my market outlook on my blog as and when I have time. However, for my clients, I may still have short emails to alert them on the markets.