Notwithstanding the rally in the equity market, there are some stocks which continue to be laggards and are consolidating around their key support areas. If the market continues to stay buoyant, it may be a matter of time before funds rotate to the following laggard stocks, namely ISOTeam, Midas and Sapphire.

ISOTeam has been testing the support area of around $0.375 – 0.390 for the past four days. Short term exponential moving averages (“EMA”) are moving lower with 20D EMA crossing below 50D EMA. It is fortunate that ADX is also moving lower to around 20. Thus, any fall in the share price may be limited. Furthermore, RSI closed at 41 yesterday, near the low of around 40 which was also the low since Jul 2016. MFI is showing bullish divergence. A sustained breach below its 200D EMA currently around $0.375 with volume expansion is negative for the chart. However, given current chart developments (See Chart 1 below), it is less likely to break below 0.375 – 0.390 on a sustained basis. A sustained break above $0.405 with volume expansion is bullish for the chart. 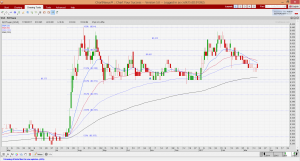 Based on Chart 2 below, Midas seems to be on a long-term downtrend since 2014. There was a minor inverse head and shoulder pattern formation last month. This is a potential reversal pattern. However, Midas is not able to breach above $0.260 (despite good results) and it closed at $0.230 on 17 Mar 2017. It is noteworthy a sustained break below $0.220 with volume expansion negates this inverse head and shoulder pattern formation and will be bearish. 20D EMA has just formed a death cross with 200D EMA. A saving grace is that OBV is creeping higher. In fact, OBV is near a five-year high. This signifies accumulation and corroborates my observations below. A sustained break above $0.240 with volume expansion is bullish for the chart.

There are a few noteworthy points on Midas which I have earlier highlighted to my clients. Firstly, somebody seems to be deliberately stacking heavy sell queue (for example, there are 4.2m sellers at 0.235). Ave 30D and 100D volume amount to only 3.8m and 2.8m shares respectively. Usually sellers with such quantities are likely to be sophisticated sellers, and they are very unlikely to queue with such heavy sell queue which will in fact “scare away” potential buyers thereby defeating their purpose if they really wish to exit. I have noticed this behaviour for the past two weeks. Anyway, this is my observation only. I do not know how long they intend to press down the share price, or in fact they may be genuine sellers. There may even be the possibility that Midas has some negative information which is unknown to me but is known to the sellers.

Secondly, DBS Research has just included Midas as one of their conviction ideas for March. DBS analyst Paul has followed Midas for years and it is assuring that he is still positive on Midas. 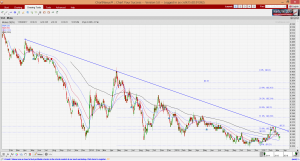 With reference to my latest write-up on Sapphire published last weekend (click HERE), Sapphire price seems to be well supported, as it rebounds from the support area $0.315. 21D has started to move higher, together with the other EMAs. (Recall that 21D EMA was turning lower in my last write-up). Indicators such as RSI, MACD have strengthened. A break below $0.295 with volume expansion and on a sustained basis is bearish for the chart. However, this seems very unlikely with the cluster of supports around $0.295 – 0.315. Furthermore, Sapphire has managed to rebound off the support area to close at $0.325 for the past four trading days. A break above $0.370 with volume expansion and on a sustained basis is bullish for the chart. All in, Sapphire chart seems to be the strongest as compared to Midas and ISOTeam. 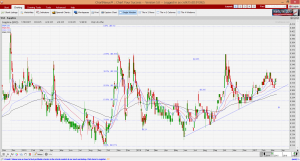 The above write-up is based primarily on a chart basis. If the market continues to stay buoyant, there may be some positive spill-over effect to the above laggards. However, readers should also refer to the companies’ developments, results and analyst / industry reports for more information before they make any investment decision.