This is a continuation of my earlier posts on BBR Holdings, so I shan’t go into the basic stuff. This post should be a quick update.

The company released it’s FY16Q4 results, and I’ve torn into it. Again, nothing too surprising in there, everything is within my projections. I have lightened my stake in the company a little this month, but that’s not because of the financials, but simply because of portfolio allocation reasons. It’s simply too large a proportion. And more importantly, I’ve been working on a new idea (brought to my attention by a reader some time ago), and would like to have more capital ready if I decide to enter.

EMERGENCE OF A NEW SUBSTANTIAL SHAREHOLDER

The share price has increased rapidly of late, mainly due to the emergence of a new substantial shareholder buying up shares in the market. Dr Chiu Hong Keong, who is the Chairman of Pintaras, a fellow construction company in Malaysia, and his wife Mdm Khoo Yok Kee have bought a chunk of shares at around $0.190+, and have continued their buying spree up to $0.2. As a result, the share price has done this:

Since the start of the year, the share price has gained something like 17%. I took the chance to sell a bit into the rally, again, simply because of portfolio allocation reasons. I sold at a price that’s still below my ave. price, but this batch of shares were bought just recently in June 2016 at around $0.17+, so I’m happy to take some money off the table first and lower my average price.

Obviously, I’m not privy to the thoughts of Dr Chiu, but as the Chairman of a peer in the same industry in Malaysia, I’m glad to see him appearing in the substantial shareholder list. Note that he’s using his personal cash to buy, not Pintaras’ $$$. I don’t see any scenario whereby this can be a bad thing.

RECOGNITION OF PROFITS FROM LAKELIFE JV

As expected, Lakelife JV finally started contributing to profits, upon TOP. They only recognized partial profits, so there’s still some meat left for FY17, and it’ll most likely be recognized in Q1. 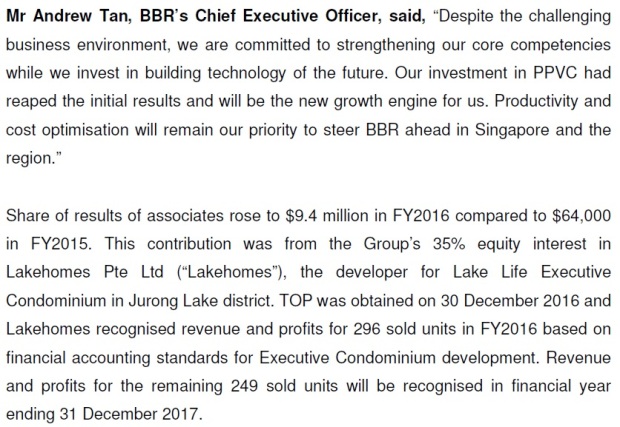 The $9.4mil recognition has been a real lifesaver for BBR, single handedly dragging BBR’s FY results to become profitable.

I’ve previously tried predicting the profitability of this project:

Based on the $9.4mil recognized for 296 units, there’s still approximately $7.94mil left to be recognized for FY17. (This is very approximate. I’m assuming a straight extrapolation is enough, but in reality the profitability for the remaining units may be different from the ones that’s recognized thus far)

“This means upon TOP, BBR’s income statement will show a nice boost to earnings of approximately 6.5 cents, and the balance sheet will have a mega boost to cash and cash equivalents of ($19.9 mil due to it’s 35% stake + $19.3mil due to loans extended to the JV) = $39mil approximately.”

This means that earnings came in a bit below my projections, but not too far off either. The reasons for that, I’ve since discovered, is that some of the units were not handed over to their owners at TOP as they were not eligible (it is an EC project), these units have since been resold, but at lower prices. Don’t ask me how I found this out. I have my sources :)

MASSIVE BOOST TO CASHFLOW COMING UP…

Upon completion of the Lakelife project, BBR should be collecting the loans to the developer. We can expect $20.1mil coming in when the loans get repaid, which will mean that FY17 would likely be CF +ve.

Of course, it may be premature for me to say this as it depends on where BBR will end up sending this cash to.

But it’s nice to start FY17, before a single financial is released, knowing that there’s like 2.6 cents to be recognized, and about $20mil + to be collected.

But it gets better. They stepped up their game further in Feb 2017:

OK. Resolution is not great.

But basically an additional 14 units had their caveats lodged with URA. The selling price PSF was maintained and in fact, even rose a bit. Currently, The Wisteria is approximately 90% sold.

Now, a bit of background info on mixed developments. Ever wonder why there’s thus far, no news on the commercial units yet? Aside from the fact that they got an anchor tenant already. Can’t rem off hand now but I think it’s either Koufu or NTUC.

The reason is simple. The developer can market and ask for higher rent when the residential part is fully sold and likely to be well occupied. This translates to more footfall, more traffic, more visibility for your brand blah blah blah.

In my (daytime) work, I’ve had some experience liasing with mall landlords. Kinda know how it works.

BBR incorporated a fully owned subsidiary, Alika properties. Alika has been active, bidding on a land parcel site at Perumal Road. They failed to win though, and in fact, came in 2ND LAST amongst all the bidders: 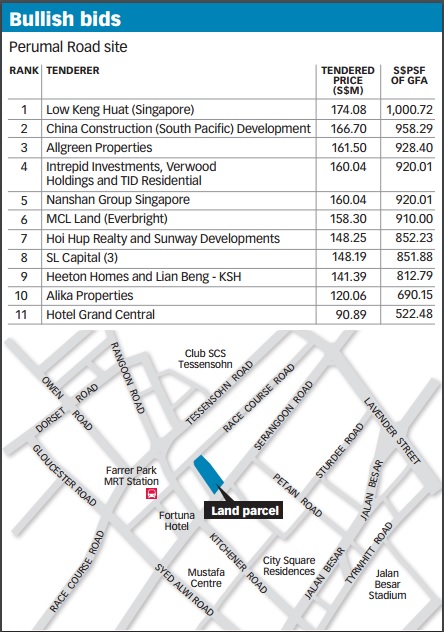 They failed to win the tender, came in 2nd last, and you’re including this as a “good thing”?

BBR’s main problem is getting their fingers into too many things, but failing to be a master at any one of them. I have a compiled list of their recent projects, and just look at how many projects they have to handle:

Compare that to some of the builders that I’ve previously analyzed, and BBR is over stretching themselves.

It’s like when Michael Jordan decided to play golf competitively at 1 point. He didn’t do very well then huh?

In my previous (nasty) correspondence with the management:

They indicated that they’ll complete the loss making projects, and going forward, exercise caution in their bids:

Imagine they won the bid by a large margin. I’ll panic.

On a side note, and there’s no official announcement on this so don’t bother looking up SGX announcements, but one of the “2 new senior personnel”, is Dr Jeremy Wu, who joined the company as Executive Director and director of corporate development in May 2016.

BBR declared a special dividend, so the total dividend for FY16 would be 0.6 cents.

While it’s an increase from previously, the yield is still miserably low at around 3%. I guess a growth in dividends can be classified as a good thing.

I wasn’t expecting a dividend raise so can’t complain here.

NO SUCCESS IN REDUCING OPERATING COSTS

Let me quote from the reply above:

Now, look at the most recent income statement: 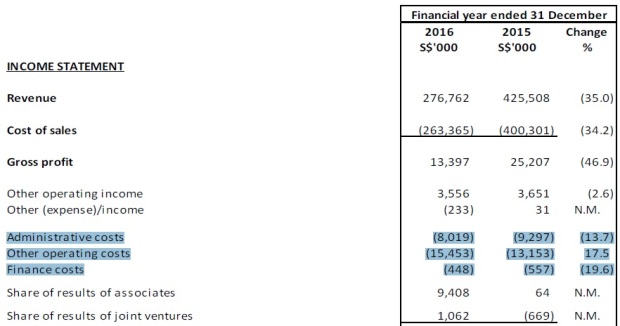 Wait. Let me get this straight. And these are facts I’m sprouting here:

The company spent $23mil, to achieve $425mil in revenue in 2015. The management says, OK this isn’t good enough. We’re going to (and I’m quoting here) “implement appropriate cost cutting measures on a consistent basis”, and after that, they spent $23.92mil (even more!) to achieve $277mil in 2016 (reduced revenue)

As I always say, don’t bother with what the management says. Watch what they do.

But here, I’ll add a caveat. It’s probably too superficial to look at these figures and conclude that they didn’t or failed to do any cost cutting. They’re lagging figures anyway. The revenue is locked in periodically, so some of these costs could be incurred now, and the revenue will come later.

Plus a lot of their activity is via the JV and associates, and that does NOT show up in revenues. So, while I utilize figures to substantiate a point, I’m just adding a caveat to say that, well, they’re not 100% reflective either.

This is the biggest disappointment for me. Will this EVER stop? They are still bleeding money fixing up past issues. Management has, for obvious reasons, declined to reveal which projects are loss making.

And I quote from the press release:

“Gross profit for FY2016 was lower at $13.4 million during the year compared to $25.2 million for FY2015 and this was mainly due to decrease in revenue and cost overruns incurred for certain general construction projects.”

Now, my opinion here, is that the bloodletting is now finally over. Management didn’t guide for it, but I derive this conclusion by tracking their projects and comparing it to the quarterly statements.

My belief is that losses from general construction segment ends in FY16. We shouldn’t see more project losses in FY17.

From the projects that are completed in FY16, I surmise that the losses came from the HDB projects, and possibly the government tenders such as the Keppel viaduct project.

I’ve tracked this for some time now, and it seems their problems first started in FY14Q3 (or at least, it was first mentioned in that earnings release).

2 years+ should be enough for these projects to run it’s course.

I’ll stick my head out for BBR here, and state that I personally think the worst is over for the company.

FY17 should show improved financial metrics across the board compared to FY16.

Their current ongoing projects would be profitable, and the fact that they’re looking for more work has not been lost on me.

I hope the management stick to what they say they will do, and adopt a more disciplined approach to project management. If you’re not going to earn a margin on the project, forget it. Downsize if you have to, but don’t commit to stuff that will come back to haunt you later.

I am optimistic that the company will do better going forward compared to the previous 2 years.