Midas issued a positive profit alert yesterday. It cited “…based on the Board’s preliminary review of the unaudited management accounts of the Group for the year ended 31 December 2016, the Group expects to record a substantial increase by over 70% in its profit attributable to owners of the Company for the year ended 31 December 2016 as compared to the same period of previous year. Such increase was mainly attributable to the contribution from our Aluminium Stretched Plates Division which we completed the acquisition on 27 July 2016.”

What does this mean?

My personal take on the above statement

Based on my two cents’ worth, there are two pertinent points in the short paragraph above. Firstly, according to Midas’ above statement, it is possible to do some back of the envelope calculations. FY16F net profit is likely to be approximately RM97m, so that it is 70% higher than FY15. If this is true, 4QFY16F is likely to register a blistering growth of approximately 121% y/y to RMB45.9m vs RMB20.8m in 4QFY15. Secondly, such profit growth may be mainly attributable to one-off factors. Thus, Midas seems to be cognisant of this (and considerate) to explain “that such increase was mainly to Aluminium Stretched Plates Division, Huicheng’s contribution”.

To recall, in my previous write-up “Is Midas a recovery play in 2017? (3 Feb 17) – click HERE”, I wrote “Huicheng contributed about 2 months of earnings to Midas in 3QFY16. It will contribute its full 3 months of earnings in 4QFY16F and 12 months in FY17F. We may be able to get more details in 4QFY16F, especially if Huicheng manages to attain its “earn out target” by registering RMB80m in net profits for FY16F.” It will be interesting to see whether Huicheng attains its earn out target.

As always, I wish to emphasise that the above is a basic back of the envelope calculation, based on my rudimentary interpretation of the statements put forth by Midas. As I am a stock broker and not a full-time equity analyst, it may be better to rely on analyst reports and do your own research.

Based on Table 2 below, it is apparent that Midas has exceeded DBS analyst’s earning expectation for FY16F. (I used DBS as DBS has a higher earnings estimate than OCBC). It will be interesting to see whether there will be updated analyst reports post 4QFY16F results.

Based on Chart 1 below, it is very significant that Midas manages to close above its 200D exponential moving averages (“EMA”) for 15 consecutive trading days. This is the longest period since Apr – May 2015. All the EMAs have turned higher. 50D EMA has formed a golden cross with 100D EMA. ADX closed at 38, amid positively placed directional indicators. This is indicative of a trend. OBV continues to be on a generally rising trend. Midas chart seems to confirm a bullish inverted head and shoulder formation and it has tested the support or breakout level at $0.240 on last Friday. The eventual measured technical target of around $0.275 continues to be valid and may even overshoot. 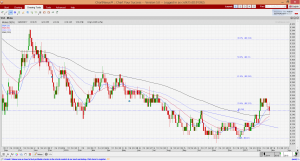 In my previous write-up, I have mentioned that it is reasonable to say that investors’ expectations for Midas are currently low which result in low historical valuations of around 0.5x Price / Book Value. Thus, it should be relatively easy to surprise on the upside. FY2017 may shape up to be an exciting and interesting year for Midas.