Come May, you will soon earn less interest on your bank deposits.

No, this isn't an April Fool's joke (although I certainly wish it was). With interest rates dropping across the globe, not to mention that of SIBOR and the Singapore Savings Bonds, we knew this was only a matter of time.

DBS, OCBC, UOB and Standard Chartered has recently announced a reduction in bonus interest rates paid out on their high-yield savings accounts. UOB One's changes are massive, whereas the least affected should be customers of DBS Multiplier.

(I'm still in shock that SSB now only yields less than 1% for the first 2 years! If you're looking for an alternative for the next 3 years, check out NTUC Income's Capital Plus with 2.13% instead here)

Here are the key changes you might wanna take note of, so you don't get a shock when you see less money in your account from next month onwards: 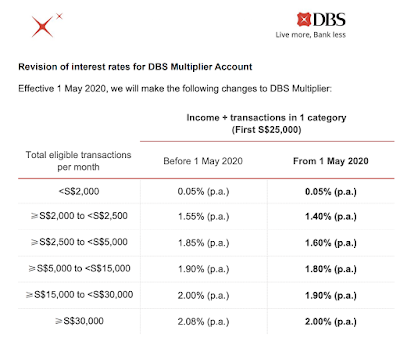 DBS' latest changes are limited to just folks who are in the income + 1 transaction category tier, and on the first $25,000 only. This translates to a reduction of less than $40 a year, so that really isn't much to cry about.

If you've been using the DBS Multiplier account with income + 2 transactions (or more), then you are still safe for now. 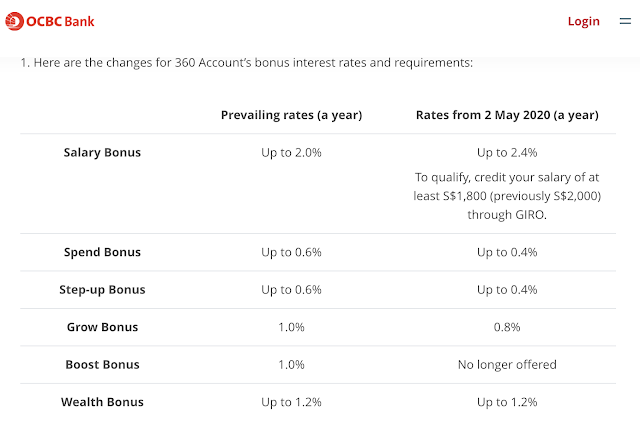 OCBC has reduced its interest across the board as well, but those who are crediting your salary can still celebrate because they've raised the interest to 2.4% on your $36k - $70k deposits i.e. you'll have to retain at least $70k in your account to enjoy this.

Previously, under the Boost benefit, you could get a bonus interest of 1% on your OCBC 360 deposits as long as your account balance this month is more than last month i.e. save more than you withdraw. This was a super easy criteria to hit, but come 2 May 2020, the Boost benefit will be officially nerfed.

I'm not the biggest fan of OCBC credit cards as their perks pale in comparison to other cashback cards, so I've personally stopped using my OCBC 365 card ever since the minimum spend was raised from $500 to $800.

Oh and parents, your children aren't being spared either. If you had opened your child's CDA account with OCBC, you might want to also note that the interest rate has been reduced from 0.2% to just 0.1% on your child's first $20,000 now. While OCBC continues to offer 0.2% for amounts beyond $20k, my suggestion would be not to leave your money there because that kind of interest is not worth it in exchange for not being able to withdraw the money whenever you want. 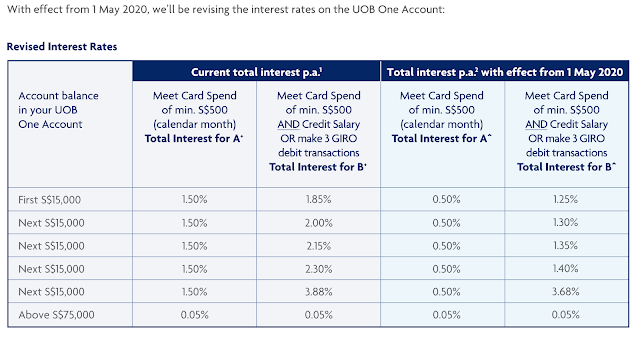 I've always been a fan of the UOB One account since it launched in 2015, but the latest interest reductions might just change that.

I've previously shared about how one of the best ways to utilise the UOB One account would be to NOT credit your salary, since you only have 1 monthly salary to credit and a plethora of bank accounts to choose from. Instead, I felt the Credit Card Spend + 3 GIRO transactions was the best and easiest way to hit the bonus interest tiers.

But coupled with the recent changes in the UOB One credit card as well (especially now that Grab top-ups do not count), there's less of a reason to love the account as much as we used to.

Easiest combo for UOB One bonus interest in 2020:

Folks who used the UOB One account with just credit card spending to get the 1.5% bonus interest will be left disappointed, as your rates have now been slashed to a mere, horrible 0.5%.

Best to add at least 3 GIRO transactions now to boost your interest now. 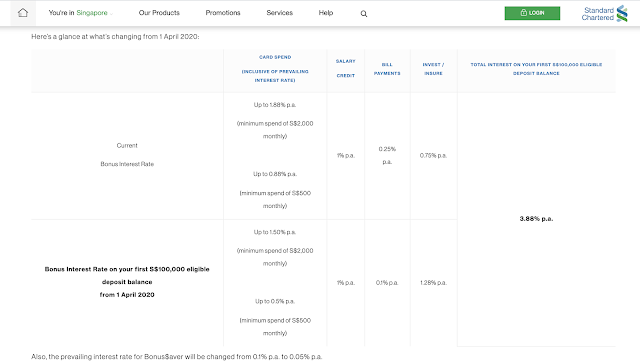 SCB started reducing their interests the earliest, effective as of today, 1 April 2020. The prevailing interest rate is now a mere 0.05%, halved from its former 0.1%.

It seems quite clear that SCB is trying to push you guys to invest or insure with them, given that the rates for this category has been raised from 0.75% to 1.28% now.

And for those of you who have been spending the monthly minimum of $500 on your SCB credit cards, you'll be disappointed to know that the bonus interest rate has now been cut from 0.88% to 0.5% p.a. max.

What should I do now?

There's nothing much you can do for now, since interest rate is being flattened in order to delay or prevent the economic fallout from COVID-19.
Rather than relying on just your bank account, you might want to start looking seriously at other financial instruments to help you grow your money.
The stock market has already entered bear territory, and there has been quite a few quality stocks that have become cheap in recent weeks. I've been buying some - you can read more about my purchases and watchlist here on Patreon. It is a great time to start investing, and if you play your cards right, you might just emerge richer after this crisis.
However, if you have a low risk appetite and cannot stomach the volatility of the stock markets, then another option would be to look at short-term endowment plans for now. Many of these are still offering more than 2%, including the recently-launched NTUC Income's Capital Plus. You can check it out here.
As always, stay healthy and don't make stupid financial mistakes.
With love,
Budget Babe