If I were to believe what all the influencers on the #KrisFlyerUOB campaign said, I'd think the account and debit card is a wonderful deal.

Except that it is not.

Now, here's where it gets interesting. I personally thought it was a terrible product, but apparently all these (realllllllly popular) influencers don't seem to share my views. In fact, they had nothing but praises for it!

I'll upload my analysis of the account in a separate post, but that's not why I'm here today. I'm here because I felt this whole marketing campaign was downright misleading, and that's not good.

1. Shouldn't influencers at least try to first understand the product they're promoting?

Considering how much they charge for an advertorial on their social media channels, wouldn't this be a bare minimum? (And these popular influencers charge more than what a fresh graduate makes in an entire month! Melissa Celestine Koh charges upwards of $3,500 for an advertorial on her blog, and Brad Lau of Ladyironchef billed a restaurant $3,800 in 2015 for a review, I won't be surprised if their fees are a lot higher now.)

Apparently not, as most of them didn't even seem to have the basic knowledge of "miles per dollar" (except thetravelintern). What they wrote instead was : 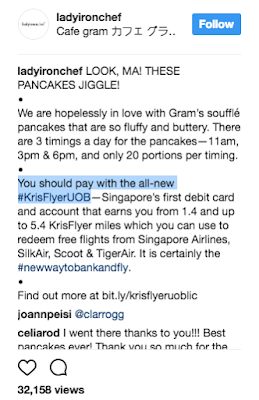 Is that 1.4 miles per dollar spent? Or for every 1 cent that I spend? Now THAT will be a real game changer! If that's the case, I most certainly should be paying with #KrisFlyerUOB! 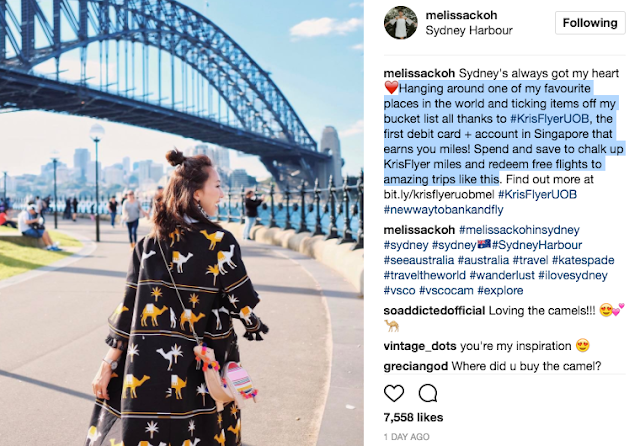 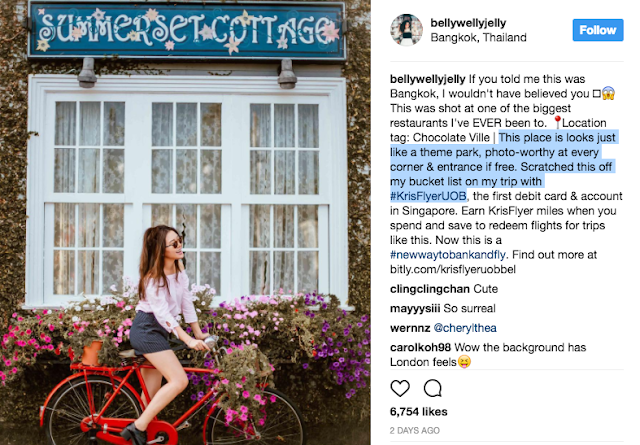 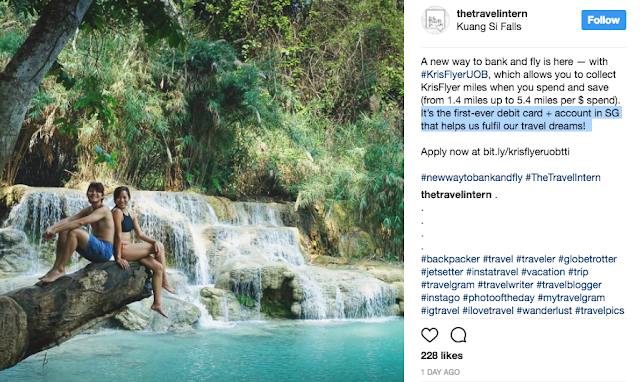 2. It sounds like they're implying they've unlocked their trips from the #KrisFlyerUOB account, but that is IMPOSSIBLE.

Given that the account was literally just launched a few days ago and that any miles earned will only get credited at the end of the month (the T&Cs here), how on earth did these influencers manage to do that?!

Did they already spend $18k and $60k respectively AND somehow found a way to get their miles even before the account was launched? Maybe they asked the guys at UOB to credit into their account early so they can exchange for their trips in order to get this unbiased review out in April?


3. Did they forget to declare it as sponsored?
I doubt it, looking at how they've remembered to do it for their other sponsored posts:

As none of them tagged their posts as #sp, #sponsored, #ad or #advertorial, we can then assume that they are all unbiased reviews based on the influencers' own experience with the account. Right?

The Advertising Standards Authority of Singapore (ASAS) has this to say:

Even if a blogger is writing his genuine thoughts about a product or service provided by a company he has a commercial relationship with, he should declare the relationship in the post.

Update: Now that people are calling out on their bluff, bellywellyjelly has added the #ad hashtag to her #KrisFlyerUOB posts. Is it too late for regrets? You'll be the judge.


4. If they are indeed "content creators", how come these influencers all seem to be doing a "cut-and-paste" job when they wrote about #KrisFlyerUOB?

Surely there are other words than the ones provided to you in the brief. Otherwise, let me introduce you to what I tell my General Paper tuition kids to use : www.thesaurus.com


5. Do Influencers Influence? What if they've misled their audiences?

Spiderman once said, "With great power comes great responsibility." I think the basic responsibility of all influencers who accept paid postings is to at least be honest and get their facts right. 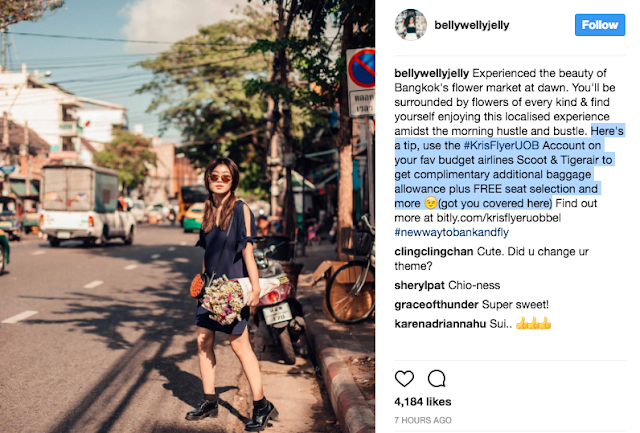 Now let's give Christabel the benefit of the doubt and assume she'll never give a BAD tip to any of her readers, especially since she says she's got us covered.

But boy, this certainly sounds like a bad tip to me, because she forgot to mention that:

- The complimentary extra baggage...comes only after you first pay for 20kg in your booking. You'll then get just 5kg extra, which is even less than the hand-carry limit.

- The FREE (in caps, no less) seat selection...sounds good too, except that I have to still pay for the rest of my family travelling with me. Are you crazy?! Sit separately from my husband and friends on the flight?! No way! I'm clingy like that.

They describe it as a "piece of cake" and that it is "easy", but they forgot to tell us that you'll have to first spend $18k - $60k if you want to "unlock" their trips.

Maybe it is a "piece of cake" for them, but it isn't for the rest of us who aren't sponsored and don't earn as much income.


6. What do influencers really mean when they say they're "genuine" and "true to" themselves?

Hear it from Melissackoh, who calls herself a "content curator" and asserts that she does it "not for money...because I had a genuine desire to construct content that would move and inspire people in powerful ways".

As a blogger myself, I don't see how the content on this whole #KrisFlyerUOB campaign was curated by them at all. What I see instead are people who bother to properly understand the product, didn't read the T&Cs, didn't bother to check whether the #KrisFlyerUOB account is truly a good deal before they promoted it to their massive throngs of followers.

And since they do acknowledge that their content has the power to influence people, wouldn't they have misled their readers into thinking this was a good deal?

I don't know about all their other followers, but when I saw it on their pages, I did think it was. That is, until I checked out the facts.

Bel's follower is saying "yes" to #KrisFlyerUOB too. Influenced? 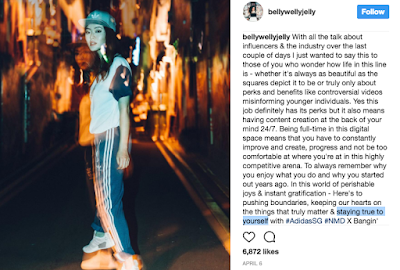 What does it really mean to "stay true to yourself" as an influencer? Is it to charge brands a high fee, then take our clients' money and write posts like these?

I'll put it out in the open that I've written sponsored posts too, which are 100% authentically me. Read what I had to say about the UOB One account and POSB CashBack initiative here. But I only accept products I genuinely think are good. I'm not afraid to reject the ones I think aren't. I say it as it is. I check my facts. I dig and ask all the hard questions (ask my clients!) before I post my review. That is what I believe means to be "staying true" to myself.

Oh, and neither did I add the sponsored disclaimer only after people called me out on it. Just check the Google Cached version and you'll know.

Another local influencer, with close to 45,000 followers, recently emailed me to say she didn't intentionally mislead her readers to think of me as a scrooge or a miser, just because I wrote a piece on how to save more money by going on a financial fast. Weird, because I didn't even say she called me that. Was she staying true to herself when she wrote that? I can't be sure either, because she has since taken down the paragraphs which I felt insulted by.

I'll upload my analysis on the account tomorrow (I'm just waiting for Aaron from MileLion.com to send me his miles-hacking strategies, which are infinitely better than this #KrisFlyerUOB).

Remember to not just take what you see on the Internet at face value guys. Thanks to these people, I've now learnt that I can't just trust what influencers say anymore.