If a company can catch the eyes of China’s largest property player Vanke and Europe’s largest hotel group / the world’s fifth largest hotel group AccorHotels, there must be some merit to it. I have managed to fix an exclusive 1-1 meeting with Mr Eddy See, Group MD and Mr Clement Ong, Head of Strategic Planning & Investment (“Management”) to understand more about their company and prospects.

a) Valuation gains from disposal of assets to BTC

BTC will initially be controlled 50:50 by Banyan Tree and Vanke through the injection by Banyan Tree of all its China-owned assets into BTC at valuation, which is to be confirmed by an independent valuation methodology. The current book value of these assets (before valuation) is approximately RMB720 million and there may be valuation gains to be booked from the disposal of assets to BTC. In my opinion, there is a likelihood that a portion of the cash obtained from the sale of assets to BTC may be given out to shareholders in the form of dividends.

b) Strengthens the Group’s presence in China

Besides consolidating Banyan Tree’s assets into BTC, Vanke may also inject hotels it owns as well as future hotels under development into BTC. BTC will also own 40% of Banyan Tree’s hotel management company in China and continue the rapid expansion of the various brands under the Banyan Tree Group, namely Banyan Tree, Angsana, Cassia, Dhawa and Laguna.

In addition, BTC will also be the development and management platform for new projects by both parties in hospitality, senior-living and wellness.

Banyan Tree agrees to issue shares to Vanke in connection with the collaboration by private placement of an aggregate principal amount of S$25 million, subject to the fulfilment of certain conditions precedent. The placement price is S$0.60 per share, or such minimum price required by applicable law and the listing rules of the SGX-ST. Banyan Tree also agrees to grant an option to Vanke to further purchase such number of shares between 5% – 10% of the enlarged share capital of Banyan Tree (the percentage to be determined by Banyan Tree) on a fully diluted basis, at a placement price equivalent to 115% of the volume weighted average price for trades done on the shares on the Main Board of the SGX-ST for the 90 consecutive trading days immediately preceding the exercise of the option (subject to compliance with applicable law and the listing rules of the SGX-ST).

In view of the above, Vanke will become a strategic investor and partner in Banyan Tree. It is likely that there may be cross selling opportunities as Vanke’s strong database of 9 million home owners will provide potential source of customers to Banyan Tree’s hotels, spas and property sales.

The amount of initial paid-up capital of BTC is estimated to be no more than RMB2,000 million. As BTC grows, Banyan Tree does not dispel the possibility that they may spin off BTC on other stock exchanges such as Hong Kong or Shenzhen in the medium term.

Based on 8 Dec 2016 press release (click HERE), under a long-term partnership, AccorHotels will invest an initial SGD 24 million in Banyan Tree via a mandatory convertible debenture that at conversion will give AccorHotels an approximately 5% stake in Banyan Tree. The strike price for the convertible debenture is around S$0.60 subject to certain conditions (click HERE for the detailed partnership announcement).  AccorHotels has an option to purchase an additional approximately 5% stake.

With this collaboration, both AccorHotels and Banyan Tree intend to collaborate to develop and manage Banyan Tree branded hotels and residences globally (excluding certain territories exclusive to BTH). Banyan Tree will also have access to AccorHotels’ global reservations and sales network, as well as its loyalty programme Le Club AccorHotels. Furthermore, Banyan Tree may benefit from lower charges when dealing with online travel agencies. Based on an interview with The Mint, India dated 23 Mar 2017, AccorHotels is planning to introduce Banyan Tree to India.

Based on the above, the above collaboration with AccorHotels seems to be very beneficial to Banyan Tree.

Based on an article in Nikkei Asian Review dated 23 Feb 2017, Samir Dixit, Asia Pacific managing director at Brand Finance postulates that Banyan Tree’s brands may be worth approximately 17%-18% of the total value of Banyan Tree’s business. This far exceeds the 8%-12% for the average Asian brand.

Based on its latest annual report 2016, both Chairman Ho KwonPing and Qatar Investment Authority own approximately 66% of Banyan Tree. In a DBS Research article dated Mar 2016, DBS pointed out that Banyan may be a privatisation play. My personal view is that, in the long term, if the company continues to trade at persistently low valuations, there may be a possibility that Banyan Tree may be privatised and re-list on some other exchanges which can appreciate Banyan Tree’s business and brand value.

It is noteworthy that Chairman Ho has been acquiring shares from the open market from Feb 2016 to Mar 2016 with his purchase price reaching as high as $0.590. 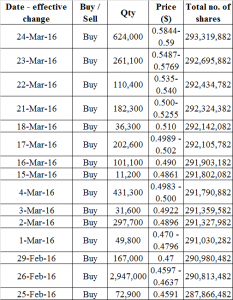 Have been loss-making for the past two years

Banyan Tree has registered losses in FY15 and FY16. Management highlighted that for their business model, it is more representative to focus on their earnings before interests, taxes, depreciation and amortisation (“EBITDA”), instead of their net profit after tax. This is because for their business model, they incur high depreciation and interest expense. Furthermore, for their property sales segment, they can only recognise revenue on completion but expenses are billed regularly as and when incurred.

There has been a long outstanding legal suit on Banyan Tree’s subsidiary companies and directors (click HERE). However, management assured that to their knowledge, this is the only legal suit against them (where they are the defendants). Furthermore, there is no financial impact on them as the Appeal Court ruled that they have not unlawfully used the land so they do not have to compensate the plaintiffs. Furthermore, the Appeal Court dismissed the suit against directors of the company.

There has been no rated analyst coverage on Banyan Tree for years as some analysts have ceased coverage. This may be due in part to the illiquidity of Banyan Tree’s shares, coupled with the losses generated for the past two years. This may change once Banyan Tree’s collaborations with AccorHotels and Vanke gain traction.

Banyan Tree’s average price to book (“P/BV”) is around 0.77x for the past five years. It is trading around 0.67x P/BV to its book value of around $0.740. It is noteworthy that its book value may increase with the disposal of assets to BTC even after taking into account of the private placement of an aggregate principal amount of S$25 million to Vanke. If Banyan Tree were to revert to its average 0.77x P/BV, this would translate to around $0.570.

Figure 1: Banyan Tree’s P/BV ratio for the past five years

Since Dec 2016, Banyan tree seems to be on an uptrend, evidenced by its rising exponential moving averages (EMAs) and golden crosses. 20D EMA has pulled apart from 50D EMA after converging. Amid positively placed direction indicators, ADX closes at 38 on 17 Apr 2017, indicative of a trend. OBV is trending higher but it is still below the high registered in Feb 2017. RSI is not overbought yet and closes at 61 on 17 Apr 2017. Since 23 Jan 2017, Banyan has largely traded between $0.465 – 0.530. A sustained break above $0.530 with volume expansion points to an eventual measured technical target of around $0.600. A sustained break below $0.465 points to an eventual measured technical target of around $0.400. Given the current information, the odds of an upside breakout outweigh that of a downside breakdown. 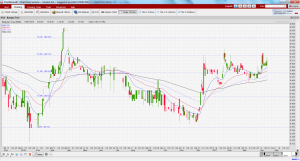 This is just a brief description of Banyan Tree. Readers are advised to refer to Banyan Tree’s website (click HERE) and its announcements on SGX for more information.