I have managed to fix an exclusive 1-1 meetup with Mark Zhou, Head of investments, GEAR (“Management”) to find out more about the company’s business and prospects.

Key takeaways from the meetup

Management continues to be bullish about its outlook. Based on Chart 1 below, Indonesia, China and India contributed about 58%, 25% and 14% respectively. For example, Indonesian government under President Jokowi’s administration has implemented an electrification programme to add 35,000 megawatts (MW) in power generation capacity across the country by 2019. Of which, almost 20,000 MW will come from coal-fired plants. Moreover, there is increasing budget allocated to infrastructure development which fuels demand for cement. Coal is used intensively in the cement manufacturing processing plant.

According to management, China’s coal imports, which has surged 64% to 24.91 MT in January this year, is also projected to increase further as a result of restrictions on local productions and its recent ban on North Korean coal import. However, management does not see any negative spill over effects from China limiting imports of low-quality coal. (See next point)

Power generation in India, which is reliant on coal-fired power to meet soaring domestic energy demand, is expected to increase to around 1,750 TWh by 2020, with coal accounting for more than 1,230 TWh  Southeast Asian countries, including Thailand, the Philippines and Vietnam are growth markets for thermal coal in the years out to 2020 as coal-fired electricity is used to fuel their fast-growing economies

All in, the outlook for coal continues to be positive. 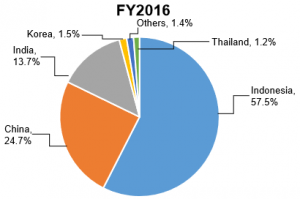 Based on a Reuters’ article this month, China is controlling imports of low-quality coal amid concerns on smog and overcapacity in the world’s top coal consumers. However, management does not see any negative spill over effects. In fact, it is seeing robust demand for their coal which they attribute to its flexibility. This is because due to GEAR’s coal specifications (BIB 4,000 – 4,200 GAR) and large reserves, it can sell to power producers. Furthermore, as their coal has low ash and sulphur content, there is demand for their coal for blending with higher sulphur coal.

Confident of getting regulatory approval to raise BIB mine production from 7.5MT to 12MT

For such a large company of S$1.2b, GEAR is only covered by one brokerage house, KGI Securities. KGI ascribed a target price for GEAR at $0.960 with an estimated net profit attributable to shareholders amounting to US$100m, which is almost 5x that of FY16 net profit.

In view of the above, management is cognizant that it can do more to engage the investment community. It is doing a presentation to retail investors at SGX seminar on 30 Mar 2017. Furthermore, it is planning a site visit around the week of 20th Apr 2017 for analysts and media.

Comparison between Geo Energy and GEAR 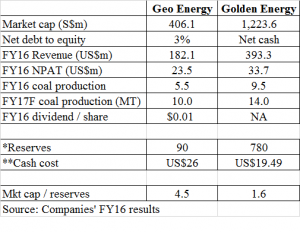 * Geo Energy reserves include the acquisition of TBR, to be completed in 1H17

** For GEAR, management believes that the cash cost should broadly stay around the above level in FY17F

Based on Chart 2 below, although coal prices may have hit a near term peak in Dec 2016 and have slid 17% since then, there is a couple of noteworthy points.

Firstly, to put things in perspective, Ecocoal, at the Mar 2017 price of US$44.41, is still up approximately 45%, compared to one year ago. Secondly, the rate of monthly decline seems to be slowing. i.e. there is a possibility that it may trade sideways in the next few months. In KGI’s analyst report, they use a long term average selling price (“ASP”) of US$42 / tonne to derive their target price of S$0.960. As of now, coal prices are still trading above KGI’s long term ASP assumption. 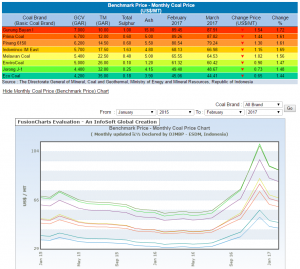 With reference to Chart 3 below, GEAR is testing the support area of around $0.510 – 0.520. After the sharp drop post its listing on 12 Dec 2016, there seems to be a short to medium term uptrend as depicted by the uptrend line. However, a break below $0.510 on strong volume and on a sustained basis is negative for the chart.

GEAR continues to lag behind Geo Energy in term of share price. This may be due to the market’s unfamiliarity with GEAR. Hopefully, this will be resolved to some extent by its continual delivery on its results (supported by a positive macro outlook), coupled with its investment seminars and site visit.

Readers are advised to refer to GEAR’s website (click HERE), the announcements on SGX, KGI research report and my previous write-up (click HERE) for more information.