Any bride seeking to look good for her big day will surely want to lose some weight, but I've not had much success despite exercising regularly. The most frustrating part would be watching how bloated my tummy became after every meal; I certainly didn't want a protruding tummy in my gown on my wedding day!

I've tried some slimming treatments in the past (you can search them on my blog) but many of them didn't work. Thus, when I saw that my doctor, Dr. Ng Hong Yi, offered Coolsculpting in his clinic, I decided to give it a shot.

Touted as Khloe Kardashian's secret to her enviable figure was enough to spike my interest. I also read more reviews here before deciding to go ahead with the procedure.

Originally from the U.S., there has since been imitation machines coming out in the market, but Zeltiq Coolsculpt is the most trusted brand among doctors and medical practitioners. It is a medical device and should only be done in a doctor's office to be safe.

How does Coolsculpting work?

My doctor explained that Coolsculpt is basically a non-invasive fat reduction method which freezes fat cells through extreme cold temperatures.

Since fat has a different freezing point compared to the body's surrounding tissues, the cold temperatures do not harm the surrounding areas while it targets the fat cells. I was then encouraged to drink lots of water to facilitate the body's natural elimination of the dead fat cells after the treatment. Since the fat cells are killed for good, the effects and fat loss are permanent and long-term. Up to 20% of fat cells can be removed with each session.

My doctor told me that although there are no serious side-effects, each patient's body reacts differently to the procedure and he advised me to be prepared for potential bruising and numbness for up to a week after undergoing Coolsculpting.

My experience with Coolsculpt

Two words: Painful, but effective. Will I do it again? Yes.

Aside from the initial suction pressure I felt when the device was first placed on my tummy, I did not feel anything else for the remaining hour while the machine was freezing my fat cells off, mostly because the area went numb within a few minutes. I was clearing my emails and happily watching a DVD for the rest of the time.

It was after the device was removed that the discomfort really set in. My tummy area looked like a fat blob of frozen butter (I was too shocked to remember to take any photos, oops) and my immediate thought was, am I supposed to go around with this slab until it goes down?!

Apparently not. I was given a massage to ease the area back into its normal position, and that massage was effing uncomfortable.

Not painful (not the stinging or hard type of pain, at least), but the pressure was almost unbearable. It wasn't enough to make me scream or cry, but you know that feeling girls get during their period cramps? It felt exactly like that for me. I was squirming all over the place.

The discomfort took about 10 minutes to go away after the area had been fully massaged. I took a photo of how red the area was after the treatment once I felt better. 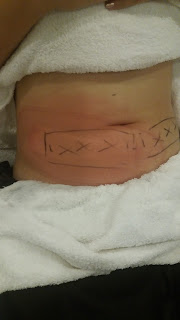 However, by the next day, my tummy became quite swollen that I looked almost as though I was 2 - 3 months pregnant. The nerves in the area felt so sensitive that even when I brushed my fingers across my tummy lightly, I could feel a stinging sensation. Although it didn't hinder me from going back to work, I had to be careful whenever I walked down any steps and to sit down slowly, otherwise there would be a sharp pain.

I went back to consult Dr. Ng as I was worried that my nerves had been damaged (could nerves be frozen?) but he assured me that this was normal during the recovery, although some patients may take a longer time to recover. I couldn't dance for 2 weeks because I could feel the sensation of the inner bruising and it was quite bad for me. Dr. Ng then prescribed me some painkillers which helped me get through my dance performance a week later.

Lesson learnt: I must never do this before any big event that requires me to be physically active!
The redness then turned into a bruise (but I misplaced the photo of my bruised tummy, so here's one of my arm instead, which I did after) but the swelling only went down about 2 weeks later, so I had to avoid cropped tops and tight-fitting clothes for a period of time.

Note: My recovery period was apparently abnormally long (the norm is 3 days to 1 week), so if you're thinking of going for Coolsculpt, you'll probably recover much faster than I did. 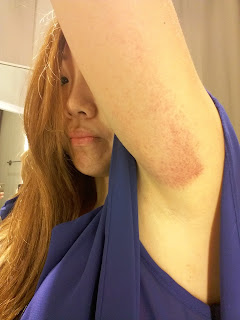 The reason why I'm sharing my (recovery) experience is so that you'll be prepared if you're thinking of going for Coolsculpt. While there are patients who did not feel so much discomfort or pain as I did during the recovery period (lucky them!), do be prepared that there's a chance your recovery period may be slightly difficult.

Despite all these, I went back for a second treatment on my arms because I felt that my tummy did indeed feel flatter after the treatment! It no longer feels as bloated anymore after my meals, and definitely does not look as big as it used to be right after a heavy meal. 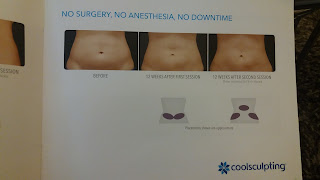 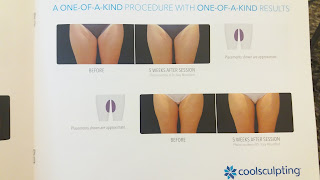 Before I returned for a second session on my arms though, I read more about Coolsculpting in Singapore and found that there were other beauty salons offering the same fat-freezing treatment at a much lower price. I got concerned and enquired on the difference, and then I realised that the others are probably not FDA-certified machines. The key difference between the imitations and the original Zeltiq Coolsculpt machine is that it does not come with the safety disable feature which automatically shuts off the machine if your body temperature drops to a dangerously low level. This is important to prevent any physical damage to your body and the treated area!
Aha, that would explain the price difference. I can imagine that the procedure can be quite dangerous if not properly administered, especially since my experience wasn't quite as smooth and it really helped to have Dr. Ng there assessing the area after the treatment to reassure me that everything was fine, because I certainly felt otherwise.
Even though the price for imitation machines are much cheaper, as much as I want to lose weight and save money, I wouldn't want to risk harming my body.
Is Coolsculpt suitable for males too?
Since the treatment targets problem areas (it may not be as effective for those who are generally overweight all over their body), I'm sure men can definitely benefit from this too. In fact, I did see a few male patients at the clinic when I was there as well, although they were far rarer than the females. 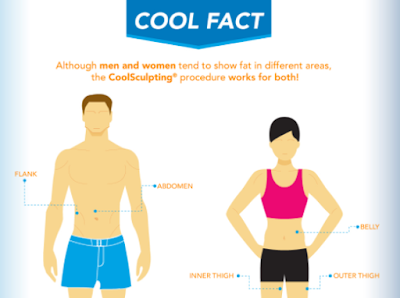 My friend who didn't see me before the treatment recently commented that my arms seem to have slimmed down, so I'm hopeful that the results will get better over the next few weeks while I wait for my body to get rid of the dead fat cells.
TLDR Review

In short, I thought that Coolsculpt was quite effective, albeit on the pricier side of $1,200 per treatment area.

However, in comparison with the cost of slimming packages at beauty salons ($3000 - $6000 for the ones I visited - no I obviously didn't sign with them), I'd much rather go for Coolsculpt as it is cheaper in contrast, and the effects are more long-term.

I've read too many horror stories about beauty treatments gone wrong, so I would personally only do Coolsculpt if (i) the machine used is the Zeltiq brand (lest an imitation one without the safety device is used on me and something goes horribly wrong and (ii) the procedure is performed in a clinic under certified doctors. This is because my recovery experience was far from ideal, and I'm extremely worried (maybe overly) about possible nerve damage due to the cold temperatures. 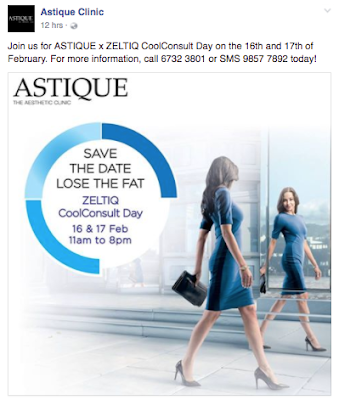 P.S. I saw on Astique Clinic's Facebook page that they're having a consultation day for those interested to find out more about CoolSculpt - you can apparently have a body assessment done to see which areas are suitable for you to do the treatment on. If you're considering whether to give CoolSculpt a try, perhaps this event might be useful?

Have any of you tried Coolsculpt too? Do share with me about your recovery experience if you did! Right now, I'm wondering if I should sign up for one more on my inner thighs...